Expway, the LTE-Broadcast expert, announced at the Qualcomm 4G/5G Summit in Hong-Kong, that Franklin Wireless is launching a series of LTE Broadband hotspot devices integrated with the Expway eMBMS Middleware. These new hotspots offer Mobile Network Operators an efficient and affordable way to deliver cable-like TV services and other content to homes in remote areas, with crystal-clear picture and sound quality, which is not possible with hotspots not equipped with LTE-Broadcast. 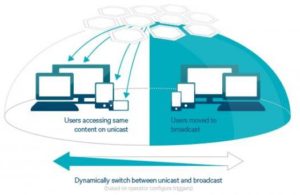 The new hotspots equipped with an eMBMS (Evolved Multimedia Broadcast Multicast Service) capable LTE modem, receive LTE-Broadcast streams from the mobile network. They then send content over Wi-Fi to mobile devices equipped with the Expway Middleware. Up to 10 simultaneous connections are supported. This allows operators to reduce overall solution costs, while supporting a wide devices and Operating Systems range, including iOS, Android and Windows.

“Thanks to these devices, Mobile Network Operators can reach new market segments that were only accessible to satellite or cable TV operators before, and significantly increase revenue per user.” Said Claude Seyrat, Expway Co-Founder and CMO. “LTE-Broadcast handsets don’t need to be subsidized, as only Wi-Fi is required. “

LTE-Broadcast is regarded as the best way to deliver live TV and large files over mobile networks, as it significantly reduces bandwidth usage peaks. For example, the estimated 0.5% of mobile traffic consumed by FOTA (Firmware updates Over The Air) can virtually be eliminated with LTE-Broadcast.

Franklin Wireless Corp. (FKWL) is a global leader in innovative hardware and software products that support machine-to-machine (M2M) applications and the Internet of Things (IoT), as well as intelligent wireless solutions including mobile hotspots, routers and modems. www.franklinwireless.com.