As Father Christmas gears up for the busiest 24 hours of his year, what skills does he use to get a seemingly impossible job done effectively and safely and can they be applied to medicine?

In the Christmas issue of The BMJ, two doctors reflect on the many lessons that the medical profession can learn from Father Christmas. 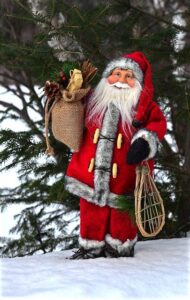 Father Christmas is unique in having 364 days to prepare for an important job, note surgeon Peter Brennan and radiologist Rachel Oeppen. Even so, they warn that staying awake for more than 18 hours “leads to cognitive function deterioration similar to being twice over the UK legal alcohol limit for driving.”

It’s well known that regular breaks as well as adequate hydration and nutrition while working are vital to maintain performance and safety, they write.

As an effective team leader, Father Christmas ensures that his reindeers have rest and food while he delivers presents, but quite how he manages to function safely at all remains a mystery given the customary glass of wine, sherry, or spirits left out for him by many households.

They suggest leaving a glass of water to counter the physical and mental effects of fluid loss, particularly if Father Christmas is wearing full personal protective equipment (PPE) this year.

And rather than indulging in sugar-rich mince pies, they suggest Father Christmas “might be better off snacking on the carrot sticks left out for his reindeer.”

Father Christmas should be commended for his exemplary engagement with checklists, but the authors note that his limited verbal communication skills (“ho ho ho”) could be improved.

With such a busy workload, high expectations, and the fear of widespread disappointment in the event of an error, the pressure on Father Christmas to deliver a superlative service must be immense, say the authors.

However, they are in no doubt that he appreciates the importance of maintaining good situational awareness, effective team working, and forward planning, enabling him to think about the many ‘what if?’ scenarios that could occur on Christmas Eve.

In this way, he avoids the likelihood of a Christmas “never event” (a serious but preventable incident) such as wrong site stocking delivery.

And when something doesn’t seem quite right, Father Christmas will instinctively know to stop the sleigh if safe to do so, step back, and reassess the situation with the whole team.

Although there is no evidence that he engages in a formal team brief, the authors say it would be naïve to think that Father Christmas does not take this vital aspect of work seriously, especially since his team works together infrequently.

Examples of good practice include agreeing roles during a possible crisis, actively lowering hierarchy, and valuing all members irrespective of seniority, sleigh pairings, or characteristic features (such as a shiny nose).

It is also important to empower team members to be able to raise concerns without fear, they add, pointing out that terms such as “Santa’s little helpers” could be regarded as derogatory and subordinate.

When their job has finally ended, it is likely that they will have a team debrief to confirm what went well, and what, if anything could be improved for next Christmas. The power of thanking all on “team Christmas” cannot be emphasised enough, they conclude.