Hardening is a surface heat treatment applied to steel parts and which increases their hardness considerably. The UPV/EHU’s High Performance Manufacturing group has conducted the study and tuning of an innovative technology to carry out this process. It involves using laser, but unlike the traditional system, it uses scanning optics, which gives the thickness of the part to be treated great capacity for adaptation. 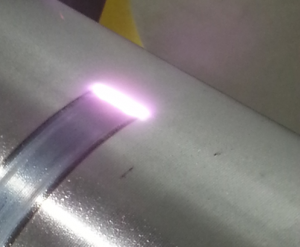 The hardness of steel can be achieved through hardening, which is crucial for steel parts requiring high wear resistance, such as sheet steel stamping dies. A heating process up to about 800-1,000 ºC is carried out followed by rapid cooling. This leads to a change in the structure of the steel.

If the hardening is carried out using laser, since it is a highly localised heat source, it enables only the surface to be hardened, leaving the core of the parts in their original state; “so the parts are not so brittle and as little heat is inserted, the part does not become as distorted. In the end, what the heat does is deform the part, and that means it has to be finished using other methods,” explained Aitzol Lamikiz, professor of the UPV/EHU’s department of Mechanical Engineering and member of the High Performance Manufacturing group that carried out the research. In industry, the laser hardening process has been used since 2000. However, according to Lamikiz, it has a limitation: “The laser sweeps a constant bandwidth so the hardened zone thus ends up with a constant thickness”.

In order to make the technology more flexible, this research group at the UPV/EHU decided to assess the viability of incorporating moving, scanning optics into this process. What the optics (a galvanometric scanner) they used does is move a very small laser at great speed, sweeping the surface line by line. That way, the hardening width can be adapted simply by changing the program parameters. Drawing an analogy between the hardening treatment and the process of painting a wall, Lamikiz explained that conventional laser hardening “would be like painting the wall with a roller, so the width that is painted corresponds to that of the roller. However, with the new technique, we substitute the roller for a marker with the finest point”.

In the experiments carried out, the first thing they discovered was that “it was possible to use this technique to carry out the hardening. Then we gradually saw how the result of the treatment changed according to the speed of the laser movement, the power used, etc. According to our tests, when the laser moves very fast, the results are similar to those of the conventional process,” he said.

EExploring the possibility of using this methodology further, the UPV/EHU’s department of Mechanical Engineering ran a project known as Hardlas in collaboration with companies in the Basque Country and Piedmont (Italy) to see how far the process was viable. “We can say that the project was a success as we saw that it was viable, and that it could be transferred to industry,” said the researcher.

Although they have tested the viability of the process, there are still steps to be taken to get as far as industrial production. One of the main difficulties they came up against was controlling the process: “It is very important to get the material treated to the necessary temperature so that the treatment takes place, but it must not be exceeded otherwise we would melt the material. In our process, as the laser is constantly moving, control is more complex,” explained Lamikiz. On the other hand, the tests were carried out “at the university using lab equipment. And to use the process on an industrial scale, it would be important to try it out with more powerful lasers, different types of lasers, on other materials, etc.,” he added.

In 2007, the High Performance Manufacturing research group of the UPV/EHU’s Department of Mechanical Engineering set up the line of research on the use of laser for the surface polishing and treatment of surfaces, and the research into hardening in 2010. The Hardlas project, in which they validated laser hardening using scanning optics, was carried out within the European Manunet call, in collaboration with IK4-Ideko and machine-tool manufacturing companies in the Basque Country and Piedmont (Italy) under the coordination of Innobasque.

Source: University of the Basque Country