High-performance electronic circuits made entirely from transparent materials could have countless applications, from head-up displays on car windscreens to transparent TV sets and smart windows in homes and offices. Researchers at KAUST have found a way to make transparent transistors and other essential components of electronic circuitry using inexpensive and readily available materials and a simple fabrication technique1.

Indium tin oxide (ITO) is the current material of choice for electronics because it combines optical transparency with electrical conductivity. Its use ranges from touch-sensitive smartphone screens to light-harvesting solar panels. Indium is in short supply, however, and as demand increases for ITO-containing devices, so does the price of indium. 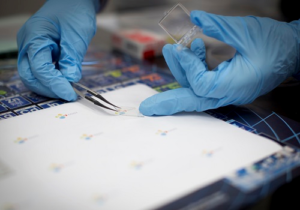 “The elements that make up this material are more abundant than indium, making AZO a commercially sensible option,” said Professor Husam Alshareef from the KAUST Physical Science and Engineering Division who also led the research. “However, electronic devices made using AZO have traditionally shown inferior performance to devices made using ITO.”

To overcome this limitation, Alshareef and his research team used a high-precision technology called atomic layer deposition, a process in which the circuitry is built up a single layer of atoms at a time. Volatile vapors of aluminum and zinc in the form of trimethyl aluminum and diethyl zinc were alternately introduced onto the transparent substrate, where they adhere to the surface in a single layer before reacting in situ to form AZO.

For many electronic devices, the key component is the thin film transistor. When combined in great numbers, these devices allow computers to do calculations, drive displays and act as active sensors. Alshareef used a transparent material called hafnium oxide that was sandwiched between layers of zinc oxide to form the highly-stable transistors used to fabricate the transparent circuits.

“Our transistor properties are the best reported so far for fully transparent transistors using AZO contacts,” said Ph.D. student Zhenwei Wang, who carried out much of the experimental work.

Another advantage of Alshareef’s approach is that atomic layer deposition only requires a temperature of 160 degrees Celsius to form each layer, which is low enough for the transparent circuitry to be formed on flexible plastic substrates as well as on rigid glass.