The digital age brims with promise for the world’s half-billion smallholder farmers. Smartphones with the right apps can tell farmers when it’s likely going to rain, how to identify and eradicate pests, and negotiate the prices for a bountiful harvest delivered by a combination of hard work and big data.

While digital technologies are steadily reaching more farmers, for each one plugged into the latest weather forecast or selling produce at the tap of a screen, millions more are sidelined as the digital revolution whizzes by. 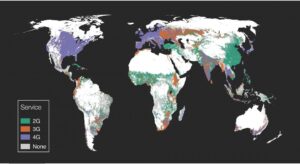 Depending on the region, this is due to a lack of devices or a combination of nonexistent, extremely expensive or outdated network coverage. For example, across Mexico, Latin America’s second-largest economy, virtually everyone has a cell phone but only 25% of farming households have internet access.

Across many locations in sub-Saharan Africa, which has the potential to be a global breadbasket, fewer than 40% of farming households have internet access. And unlike Asia and Latin America where mobile phone ownership is nearly universal, fewer than 70% of farmers in sub-Saharan Africa have handheld devices. And access to 4G networks required to run more sophisticated apps is only 9%.

“There’s an assumption that we’re going to be able to target everyone with these new technologies and everyone is going to be able to benefit,” said Zia Mehrabi, a scientist at the University of British Columbia who led the analysis published Nov. 2 in Nature Sustainability.

The study also showed major differences between farm size and mobile network services. Globally, 24-37% of farms under one hectare had access to 3G or 4G networks. Service availability is as high as 80% for farms over 200 hectares.

2G technology, which provides voice and text service, has wider availability but is not compatible with most smartphone technology.

“We face a digital poverty trap – those who are already marginalized fall further behind while others benefit from the myriad of opportunities offered by digital innovation in farming,” said Andy Jarvis, a co-author from the Alliance of Bioversity International and CIAT, who is also part of the CGIAR Platform for Big Data in Agriculture.

The researchers’ affordability analysis found that for many rural poor who do live in areas with coverage, getting connected could eat up the majority of their household budget.

“The study points to the need not only to expand coverage but vastly reduce the costs to make it affordable,” said Jarvis. “We need to consider digital connectedness as a basic need, and design next-generation innovations to work in every corner of Africa.”

The study included authors from the World Bank and the Helmholtz Centre for Environmental Research in Germany.

Noise but no signal

The study zeroed in on mobile coverage gaps where farmers need it most.

In nitrogen-deficient cropping areas, which have low yields without proper fertilizer management, 3G/4G availability was 60% and 22% respectively. Areas dependent on rainfall for production had 71% and 54% availability. For arid environments, which pose large but surmountable production challenges, coverage was only 37% and 17%.

The authors call on governments, businesses, development agencies and global philanthropists to quickly mobilize the investments and interventions needed to close the digital divide. They call for immediate action on The United Nations Sustainable Development Goal, which outlines universal access to the Internet in least developed countries by 2020.

“There’s a lot of 5G coming online. If access is not addressed at lower-end technologies, this is only going to aggravate the divide and create more inequality,” said Mehrabi.

While the future may hold universal internet access for the world – Google’s Loon, OneWeb and SpaceX’s Starlink hope to enable this – the reality is that delivery of these products is still perhaps a long way off.

“They’d better get their skates on, because we desperately need universal access in farming landscapes. And the longer we delay, the more problematic this is going to be,” said Mehrabi.