The European Commission is proposing to invest €2.7 billion in 152 key transport projects that support competitive, clean and connected mobility in Europe.

In doing so, the Commission is firmly delivering on its Investment Plan for Europe and on Europe’s connectivity including the recent “Europe on the Move” agenda. Selected projects will contribute to modernising rail lines, removing bottlenecks and improving cross-border connections, installing alternative fuel supply points, as well as implementing innovative traffic management solutions. This investment is made under the Connecting Europe Facility, the EU’s financial mechanism supporting infrastructure networks, and will unlock €4.7 billion of public and private co-financing. Such investment will not only modernise Europe’s transport network but also stimulate the economic activity and spur job creation. This year, out of the total €2.7 billion, the Commission is allocating €1.8 billion for the 15 Member States eligible for support from the Cohesion Fund[1] in order to further bridge infrastructure disparities. 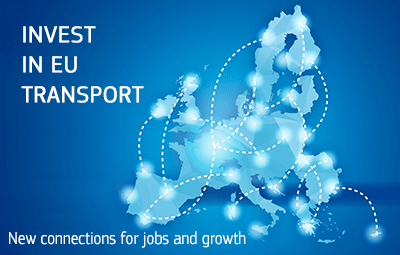 EU Commissioner for Transport Violeta Bulc said: “The demand for investment in transport infrastructure is huge. This new wave of investment focuses on clean, innovative and digital projects to modernise Europe’s transport network. Today we are one step closer to a true Transport Union, serving the needs of citizens, stimulating the economy and creating jobs. Looking ahead, I am inviting stakeholders to make best use of the remaining funds, using blending to maximise impact and leverage all possible resources.”

Selected projects are mostly concentrated on the strategic sections of Europe’s transport network (the “core network”) to ensure the highest EU added-value and impact. The largest part of the funding will be devoted to developing the European rail network (€1.8 billion), decarbonising and upgrading road transport and developing Intelligent Transport Systems (€359.2 million) and deploying Air Traffic Management (ATM) systems (€311.3 million).

Selected actions include flagship initiatives such as the upgrade of the over 100 km-long Białystok-Ełk rail section in Poland; modernisation of ATM systems in EU Member States; full expansion of the Karawanken road tunnel linking Slovenia and Austria; development of a high-speed electric vehicle charging network across Sweden, Denmark, Germany, France, the United Kingdom and Italy.

All projects were selected for funding via competitive calls for proposals launched on 13 October 2016. 349 applications accounting for a total of nearly €7.5 billion of requested co-funding were received.

This allowed the Commission to select the best projects, while guaranteeing a balanced distribution geographically and between transport modes. The EU’s financial contribution is made in the form of grants, with a co-financing rate between 10% and 50% of the project’s eligible costs, depending on its type and the call (up to 85% under the Cohesion envelope).

The EU Member States represented in the Connecting Europe Facility Coordination Committee must now formally approve the proposed funding decision at their meeting on 6 July 2017. Adoption of the formal Decision by the Commission is expected for the end of July 2017. The Commission’s Innovation and Networks Executive Agency (INEA) will then prepare and sign grant agreements with the beneficiaries of the individual projects in the second half of 2017.

Under the Connecting Europe Facility (CEF), €23.2 billion is available from the EU’s 2014-2020 budget to co-fund TEN-T projects in the EU Member States. Of this amount, €11.3 billion is reserved for projects in Member States eligible for the Cohesion Fund. Annual and multi-annual work programmes specify the set of priorities and the total amount of financial support to be committed for each of these priorities in a given year.

Since 2014, the first programming year under the CEF, three waves of calls for proposals have been launched (in 2014, 2015 and 2016). So far, following the 2014 and 2015 calls, grant agreements were signed for 452 projects. These projects currently receive co-funding from the CEF programme for a total amount of €18.7 billion. The 2016 call will help reach 92% of the total CEF Transport budget, for a total investment of € 41.6 billion in the EU economy.

Another CEF Blending call launched in February 2017 is open for transport infrastructure projects. Along with the European Fund for Strategic Investments (EFSI) and the European Structural and Investment Funds (ESIF), the CEF plays a major role in bridging the investment gap in Europe, which is one of the Commission’s top priorities.