The European Commission welcomes the independent evaluation of the Investment Plan for Europe published today by EY. The report strengthens the case for reinforcing, extending and expanding the European Fund for Strategic Investments (EFSI), the heart of the Investment Plan for Europe. The Commission proposed this extension on 14 September in the context of President Juncker‘s State of the Union Address in order to build on the achievements already delivered in strengthening Europe’s competitiveness and stimulating investment in order to create jobs. 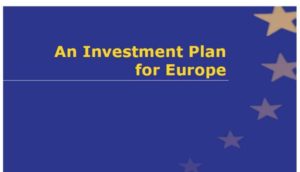 The report confirms that the EFSI mechanism works to mobilise additional investments in the real economy: EFSI allows the European Investment Bank (EIB) to take on more risk; the EU budget guarantee functions well; SME financing under the EFSI has been a great success; and there is a clear need for technical assistance to strengthen the stable pipeline of projects in Europe.

Commission Vice-President Jyrki Katainen, responsible for Jobs, Growth, Investment and Competitiveness, said: “Today’s report endorses the direction of travel in which we are taking the Investment Plan. We will take all this feedback on board and we will continue to work closely with our partners at the European Investment Bank to take the Plan to its next phase. Our aim under the Investment Plan has always been to bring Europeans back into jobs and to boost growth. The most recent data shows we are on the right track, and it is satisfying that independent evaluators agree with our approach.”

EIB Vice-President Ambroise Fayolle said: “The Investment Plan for Europe is what Europe needs to put money to work, increase growth and jobs, and strengthen its global competitiveness. The EIB welcomes the independent report by EY on the application of the EFSI Regulation. The report states that EFSI is relevant in terms of the targeted investment size of €315 billion and that it contributes to addressing market gaps through risk financing, tailor-made solutions, and new products. It also endorses EFSI’s governance structures, which are the result of a cooperative effort of all EU institutions. All these elements provide a helpful basis for discussion on the way forward on the Investment Plan for Europe.”

The report also makes some recommendations on how to further improve the EFSI and the Advisory Hub to deliver even greater level of additional investments. These recommendations are broadly in line with the suggestions made in the Commission’s 14 September proposal for an extension and reinforcement of the EFSI and the European Investment Advisory Hub, such as encouraging closer cooperation with national promotional banks; reinforcing the take-up of EFSI across the EU with a focus on less developed and transition regions; strengthening the Advisory Hub locally; enabling greater complementarity and facilitating combination with other EU funding sources; and reinforcing the definition and criteria to ensure that projects would not have been financed to the same extent and at the same time without EFSI support (so-called additionality).

The report, like previous evaluations from the Commission and the EIB, will feed into the ongoing legislative process to adopt the Commission’s proposal to extend the capacity and duration of the EFSI, as well as to make some further improvements to its functioning. Member States and the European Parliament are currently examining the proposal. The Bratislava Summit of 27 Member States of 16 September 2016 committed to taking a decision on the extension of EFSI in December in the light of the evaluation. The October European Council called on Member States to agree their negotiating position on the Commission’s proposal at the Ecofin meeting on 6 December, taking into account today’s independent external evaluation.

So far, operations approved under the Investment Plan for Europe by the European Investment Bank represent a total financing volume of EUR 24.8 billion. They are located in 27 Member States and are expected to trigger total investment of EUR 138.3 billion. (state of play 12 October 2016).

The Commission is also moving forward on the Investment Plan’s third pillar – removing barriers to investment and improving the business environment. The Commission has already made concrete initiatives such as lowering capital charges for insurance and reinsurance companies as regards infrastructure investments. The Commission will continue working on its many initiatives to deepen the Single Market. Member States must also continue to implement the necessary reforms to remove obstacles to investment identified in the context of the European Semester in areas such insolvency, public procurement, judicial systems and the efficiency of public administration or sector-specific regulations.

The EFSI Regulation, which entered into force in July 2015, calls for three evaluations or reports to be made about the Investment Plan: one by the Commission which was published on 14 September 2016, one by the EIB which was published on 6 October 2016, and a third by an independent body. EY won the bid to produce this third, independent report. EY carried out the evaluation between 21 September and 14 November 2016. The evaluation covers the period from July 2015 to June 2016, the EFSI’s first year.