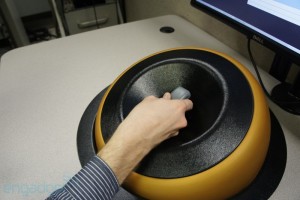 Magnetic levitation haptic devices allow users to interact with computed environments by manipulating a handle that is levitated by magnetic means. Users can translate and rotate the handle while feeling forces and torques from the virtual environment. The motors, encoders, linkages, gears, belts, cables, and bearings of traditional haptic devices are simply dispensed with in favor of a direct electrodynamic connection to the handle held by the user.

Why use such “exotic” means for facilitating haptic interaction? We believe there are several advantages, including:

These advantages lead to very high haptic interaction fidelity. A peculiarity is the inherently small motion range, which can be overcome for many applications with scaling, indexing, and rate control. Lorentz magnetic levitation for haptic interaction with virtual environments and remote environments through teleoperation has been pursued for many years chiefly through the efforts of Tim Salcudean’s group at the University of British Columbia, and Ralph Hollis’ group at Carnegie Mellon University. We welcome any and all who are experimenting with this mode of haptic interaction.

Several Lorentz levitation devices have been constructed, including the IBM Magic Wrist, the UBC Wrist, the UBC Maglev Joystick, and the CMU Magnetic Levitation Haptic Interface. The UBC joystick device was originally intended to be commercialized. The IBM and CMU devices have been operated continually since 1998 and used in a number of psychophysical and teleoperation investigations.  Recently, Peter Berkelman and students at the University of Hawaii have developed several interesting maglev haptic devices.  Magnetic levitation haptics has been commercialized by the Carnegie Mellon spin-off company Butterfly Haptics, LLC.