Scientists from the University of Southampton in partnership with the Japan Advanced Institute of Science and Technology (JAIST) have developed a graphene-based sensor and switch that can detect harmful air pollution in the home with very low power consumption. 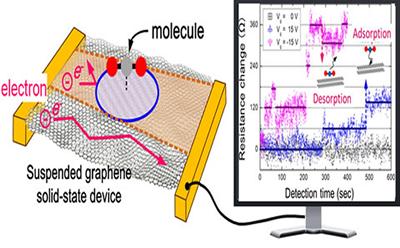 In recent years, there has been an increase in health problems due to air pollution in personal living spaces, known as sick building syndrome (SBS), along with other conditions such as sick car and sick school syndromes.

The research group, led by Professor Hiroshi Mizuta, who holds a joint appointment at the University of Southampton and JAIST, and Dr Jian Sun and Assistant Professor Manoharan Muruganathan of JAIST, developed the sensor to detect individual CO2 molecules adsorbed (the bond of molecules from a gas to a surface) onto the suspended graphene (single atomic sheet of carbon atoms arranged in a honeycomb-like hexagonal crystal lattice structure) one by one by applying an electric field across the structure.

By monitoring the electrical resistance of the graphene beam, the adsorption and desorption (whereby a substance is released from or through a surface) processes of individual CO2 molecules onto the graphene were detected as ‘quantised’ changes in resistance (step-wise increase or decrease in resistance). In the study, published today in Science Advances, the journal of the American Association for the Advancement of Science (AAAS), a small volume of CO2 gas (equivalent to a concentration of approximately 30 ppb) was released and the detection time was only a few minutes.

Professor Mizuta said: “In contrast to the commercially available environmental monitoring tools, this extreme sensing technology enables us to realise significant miniaturisation, resulting in weight and cost reduction in addition to the remarkable improvement in the detection limit from the ppm levels to the ppb levels.”

Research group members, Dr Harold Chong from Southampton and Dr Marek Schmidt and Dr Jian Sun of JAIST, have also recently developed graphene-based switches (published in the March issue of Nanoscale, the journal of the Royal Society of Chemistry) using a uniquely thin film developed at the University of Southampton.

The switches, which require remarkably low voltages (below three volts), can be used to power electronic components on demand, greatly improving the battery lifetime of personal electronic devices.

Professor Mizuta and the research group are now aiming to bring the two technologies together to create ultra-low-power environmental sensor systems that can detect single molecules.