PIQ, a leading French start-up in sports wearables today unveiled a breakthrough innovation with the introduction of a genuine Artificial Intelligence interface dedicated to sports activities. After 2 years of R&D and €13m investments, PIQ’s 50 engineers developed a revolutionary technology, protected by 10 international patents allowing to identify athletes’ Winning Factors, highlighting the key strength they should leverage on to succeed. 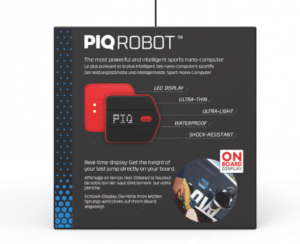 From a world where connected sports were limited to the capture of basic data, PIQ’s two cutting edge innovations are opening new horizons to the Sport Wearables industry:

– GAIA an autonomous system which – for the very first time in the world – understands and analyzes sport movements,
– PIQ ROBOTTM – the ultra-high performance sensor.

The combination of GAIA and PIQ ROBOTTM enables athletes to identify their Winning Factors, highlighting the key strength they should leverage on to succeed.

GAIA is capable of breaking down and analyze sports movements via specific motion-capture algorithms. Over the 2 years of R&D, GAIA has analyzed thousands of athletes and millions of movements growing its own automatic learning curve further expanding its intelligence day after day. This multi-algorithmic machine-learning intelligence is a result of both fundamental and applied research introducing the capacity to understand and analyze microscopic variations in sport movements.

PIQ ROBOTTM is far more than a sensor, it is a powerful nano-computer capable of analyzing more than 195,000 data points per minute in real time. All the existing clients of PIQ can benefit from this revolution through a free upgrade of the current software embedded in PIQ ROBOTTM. Thanks to GAIA’s statistical intelligence and PIQ ROBOTTM’s measurement capacity, millions of actions generated in every hour of game can now be thoroughly analyzed. Every athlete can compare his past performances on a specific day as well as measure them versus the community’s overall performance.

PIQ aims to make this major technological innovation available to as many people as possible.

Cédric Mangaud, CEO and co-founder, declared: “With GAIA and the Winning Factors, sports wearables enter a new paradigm. Our technology enables athletes, not only to measure their performance, but also to benefit from personalized advice and get closer to victory. Our goal is now to integrate this technology in sport devices to offer athletes a fully integrated experience”.