Graphene, an allotrope of carbon, discovered more than a decade ago has led to myriad research that seeks to unlock its vast potential. Zeolites, commonly used microporous solid catalysts in the petrochemical industry, have recently attracted attention in the field of material science as a template for carbon synthesis. Each individual crystal is distinguished by its unique 1 nanometer (nm) sized pore structure, this structure facilitates the accommodation of carbon nanotubes inside the zeolite. On paper, these nanoporous systems are an ideal template for the synthesis of three-dimensional (3D) graphene architecture but the zeolite pores are too small to accommodate bulky molecular compounds like polyaromatic and furfuryl alcohol that are often used in carbon synthesis. Small molecules like ethylene and acetylene can be used as a carbon source to achieve successful carbonization within the zeolite pores, but it comes at a great cost. The high temperatures required for the synthesis cause the reactions to occur non-selectively on the external surfaces of the zeolite as well as the internal pore walls, resulting in coke deposition and consequently causing serious diffusion limitations in the zeolite pores. 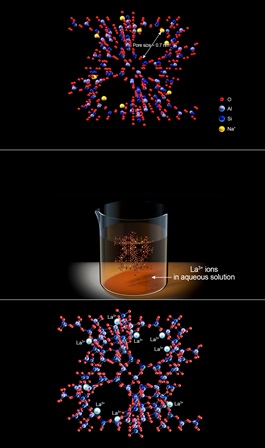 The team from the IBS Center for Nanomaterials and Carbon Materials solved this conundrum with a novel approach. First author Dr. KIM Kyoungsoo explains: “Zeolite-template carbon synthesis has existed for a long time but the problem with temperatures has foiled many scientists from extracting their full potential. Here, our team sought to find the answer by embedding lanthanum ions (La3+), a silvery-white metal element, in zeolite pores. This lowers the temperature required for the carbonization of ethylene or acetylene. Graphene-like sp2 carbon structure can be selectively formed inside the zeolite template, without carbon deposition at the external surfaces. After the zeolite template is removed, the carbon framework exhibits the electrical conductivity two orders of magnitude higher than amorphous mesoporous carbon, which is a pretty astonishing result. This highly efficient synthesis strategy based on the lanthanum ions renders the carbon framework formation in pores with less than 1 nm diameter as easily reproducible as in mesoporous templates, and thus provides a general method to synthesize carbon nanostructures with various topologies corresponding to the zeolite pore topologies, such as FAU, EMT, beta, LTL, MFI and LTA. Also, all the synthesis can be readily scaled up which is important for practical applications – batteries, fuel storage and other zeolite-like catalyst supports.”

The IBS team began their experiment by utilizing La3+ ions. Dr. KIM elucidates why this silvery-white element proved so beneficial to the team, “La3+ ions are unreducible under carbonization process condition, so they can stay inside the zeolite pores instead of moving to the outer zeolite surface in the form of reduced metal particle. Within the pores, they can stabilize ethylene and the pyrocondensation intermediately to form a carbon framework in zeolite.”

To test this hypothesis the team compared the amount of carbon deposited in La3+-containing form of Y zeolite (LaY) sample against a host of other samples such as NaY and HY. The experimental results indicate that all the LaY, NaY and HY zeolite samples show rapid carbon deposition at 800°C. However, as the temperature decreases, there appears to be a dramatic difference between the different ionic forms of zeolite. At 600°C, the LaY zeolite is still active as a carbon deposition template. In contrast, both NaY and HY lose their carbon deposition functions almost completely.

The results, according to their paper published in Nature, highlight a catalytic effect of lanthanum for carbonization. By making graphene with 3D periodic nanoporous architectures, it promises a wide range of useful applications such as in batteries and catalysts but due to the lack of efficient synthetic strategies, such applications have not yet been successful. By taking advantage of the pore-selective carbon filling at decreased temperatures, the synthesis can readily be scaled up for studies requiring bulk quantities of carbon; in particular high electrical conductivity, which is a highly sought aspect for the production of batteries.