The number of robots installed by the French car industry rose 22 percent to 1,400 units – compared with 700 units in the UK (+ 7 percent). The automotive sector is one of the main driving forces modernizing the French economy: with a robot density of 940 units per 10,000 workers, France currently ranks 2nd within the European Union – the UK ranks 10th with 606 units. 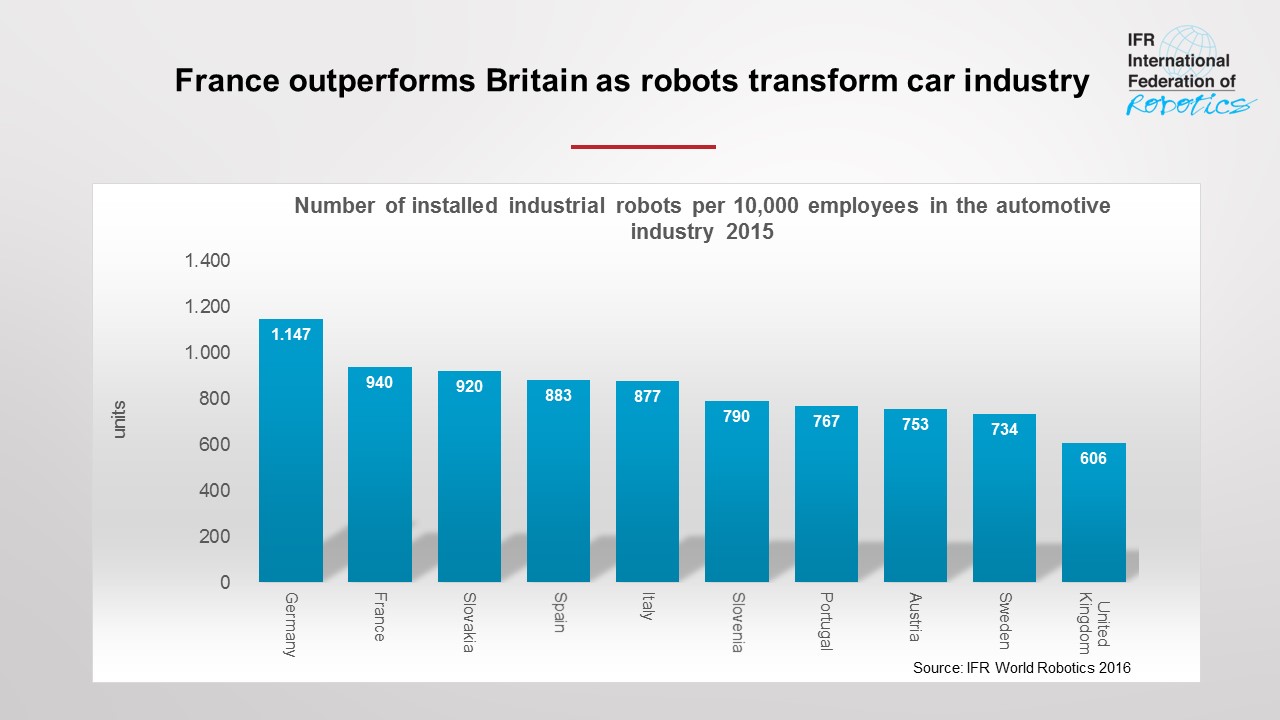 In France, investment in machinery and equipment are accelerating at a faster pace than the overall economy. The frontrunners here are the dynamic showcase industries, such as automotive: annual robot sales to the automotive industry as a whole increased by an average of 7 percent per year between 2010 and 2015. During the same period, the motor vehicle sector ordered on average 6 percent more robots per year and the demand from automotive parts suppliers increased by 9 percent. Since 2010, governmental initiatives to strengthen production in France have resulted in significant investments by the automotive industry. The two French automotive suppliers, PSA and Renault, will further invest in new car models, energy efficient cars, common platforms and also modernize their factories. Both companies have already successfully restructured to insure their position for increased productivity to meet the demand. Automotive parts suppliers will benefit from investments by the automotive industry in France as well as from the improving car market in Europe.

Automotive companies face up to Brexit

It is not unfair to assume that the decision to leave the EU will influence investment decisions by foreign car companies on production sites in the UK. For example, Japanese auto makers such as Toyota, Nissan and Honda export more than three quarters of their vehicles built in Britain, and most of these exports go to other European countries. Were they to have to pay duty on the shipments of goods, they might decide to move out of the UK. We assume, however, that the UK government will develop regulations and supporting measures to avoid this. In any case, there are currently frequent announcements on investment plans concerning capacity expansions and modernization by foreign and local automotive companies. Investments in the general industry sector should also gain momentum. The development of robot installations in the next few years depends on the question “if and when” these planned projects will actually be implemented in the country. This said, it can be assumed that investments planned by domestic manufacturers will most likely go ahead and that and that modernization, as well as a strengthening of their overall competitiveness, will continue unabated.

“The positive impact of robots on European competitiveness and employment can be seen in Germany,” said Joe Gemma, President of the International Federation of Robotics. “The country´s automotive sector, for instance, holds the top position for robot density in Europe – with about 1,150 industrial robots per 10,000 employees. As a result of the ongoing trend to automate production, employment in the German car industry rose by about 93,000 jobs to 813,000 during the period 2010 to 2015.” In France, modernization and digitalization of production systems is increasingly likely to involve small and medium enterprises over the coming years. The country´s main strength lies in industrial software and networking objects which could positively impact the implementation of new production concepts and create scope for employing innovative machinery and equipment and likely create new opportunities for skilled labor.