Ford and the University of Michigan today announce they are teaming up to accelerate autonomous vehicle research and development with a first-ever arrangement that embeds Ford researchers and engineers into a new state-of-the-art robotics laboratory on U-M’s Ann Arbor campus.

While the new robotics laboratory opens in 2020, by the end of this year Ford will move a dozen researchers into the North Campus Research Complex (NCRC).

The announcement is the latest in a series of actions by Ford as it moves toward having fully autonomous SAE-defined level 4-capable vehicles available for high-volume commercial use in 2021. Autonomous vehicles are part of Ford’s expansion to be an auto and a mobility company. 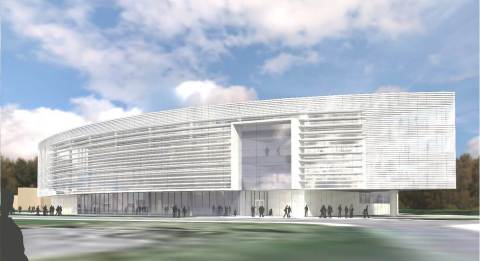 “Ford engineers and researchers will begin working shoulder-to-shoulder with U-M faculty and students to test and learn about autonomous vehicle technology and innovation,” said Mark Fields, Ford president and CEO. “We are aiming to show the world what we can achieve when leaders in business and academia work together to make people’s lives better.”

Ten years into the Ford-University of Michigan Innovation Alliance, the two parties have agreed Ford will lease the fourth floor of the new robotics laboratory. It is an approximately 140,000-square-foot building on Hayward Street, east of the university’s Space Research Building.

The planned robotics laboratory will have space where machines walk, fly, drive and swim. The building will house labs, offices and classrooms, continuing a tradition of robotics leadership at U-M that includes the creation of MABEL, the world’s fastest-running robot with knees.

By locating a team of more than 100 employees on campus, Ford benefits from being close to technical leaders as well as facilities, such as Mcity – a one-of-a-kind urban simulation test environment in Ann Arbor.

Both professors, who began collaborating with Ford earlier this summer, bring a wealth of autonomous vehicle research experience. Dr. Johnson-Roberson is an assistant professor of Naval Architecture and Marine Engineering, and has worked in autonomous vehicles since the first DARPA Grand Challenge in 2004. His research focuses on robotic systems perception. Dr. Vasudevan is an assistant professor of Mechanical Engineering with a background in robotics and next-generation automotive technologies.

“We’re at the point where you are beginning to see the positive impact driverless cars could have on people’s lives,” said Vasudevan. “Sometimes, the challenge for us as professors and engineers is knowing what the relevant research problems are that need to be addressed to guarantee the success of autonomous vehicles. Working closely with Ford gives us the data and equipment to better understand and resolve the challenges that lie ahead.”

U-M’s College of Engineering also named Professor Jessy Grizzle as Director of Robotics. Dr. Grizzle also serves as the key liaison between Ford’s autonomous vehicle research program and the College of Engineering. Grizzle’s familiarity with Ford will be of great value as the college and Ford strengthen their bonds. A U-M professor of engineering since 1987, Grizzle has spent nearly two decades as a Ford consultant working on programs such as environmentally friendly emissions, enhanced fuel economy and hybrid-electric vehicles.

“Ford is the University of Michigan’s deepest and most engaged industry partner,” said Prof. Alec Gallimore, Robert J. Vlasic Dean of Engineering. “As leaders in the fields of robotics and transportation, we’re excited to grow our partnership at a time – and place – in which these sectors are converging.”

U-M is one of only a handful of universities to offer master’s and doctoral degrees in robotics, with the Ph.D. program now in its third year. More than 35 faculty members work in the field.

Ford Motor Company is a global automotive and mobility company based in Dearborn, Michigan. With about 203,000 employees and 67 plants worldwide, the company’s core business includes designing, manufacturing, marketing and servicing a full line of Ford cars, trucks and SUVs, as well as Lincoln luxury vehicles. To expand its business model, Ford is aggressively pursuing emerging opportunities with investments in electrification, autonomy and mobility. Ford provides financial services through Ford Motor Credit Company. For more information regarding Ford and its products and services, please visit www.corporate.ford.com.