Cost-effective automation solutions for assembly, welding and woodworking, specially tailored to the needs of small and medium-sized manufacturers.

To date, high variant diversity and quality requirements as well as small lot sizes have stood in the way of the cost-effective use of “classic” robot systems in small and medium-sized enterprises (SMEs). With their complex set-up, high space requirements (with separation from humans) and inflexible programming, robot systems have so far been incompatible with the customer-focused production methods of SMEs.

To allow a higher degree of automation at SMEs, the SMErobotics initiative has developed intelligent robot systems specially tailored to the needs of such companies. These systems, which require no separating guards, can work with and alongside their human colleagues. New technologies for intuitive programming and robust sensormonitored program execution enable SMEs to make efficient use of robot systems, also when there are many different product variants, while further improving the throughput and quality of their products.

One of the goals of SMErobotics is to allow the worker to easily instruct the robot and to control it in a reliable and time-saving manner. This is made possible by the programming of assembly and handling tasks using intuitive graphical control panels. The worker instructs the robot in easy-to-follow steps using a skill-based graphical programming system, i.e. one based on ready-to-use program modules.

In another graphical programming system for complex assembly tasks, such as the assembling of gearboxes, the user interactively specifies the assembly steps on the CAD model, independently of an actual robot system. Powerful planning/reasoning systems then automatically compute the necessary robot motions based on models of the individual components and the executing robot system. In tests, this enabled workers with no robotics experience to program assembly tasks between 10 and 15 times faster than experienced robot programmers with a handheld teach pendant.

Robust, skill-based program execution also allows a transparent approach to inaccuracies in environment and on workpieces. This is vital for SMEs, because, for example, robot systems often need to work on manually prepared workpieces with tolerances or deviations from the design data. In addition, the use of sensors for workpiece localization and measurement extensively dispenses with the need for fixed workpiece positioning devices.

The described software modules for intuitive programming and program generation were developed independently of specific models of robot. They are available as standalone modules and can be used by automation and industrial IT suppliers in their system solutions.

Having already been tested in initial real-world trials, several robot cells and workstations for human-robot collaboration demonstrate the practical benefits of the software components in typical SME production scenarios.

Developed by Fraunhofer IPA, “CoWeldRob” is a welding cell for “lot size 1”. Robust 3D sensors, extensive technology/process models and an intuitive graphical user interface allow preassembled components to be seam-welded in just a few simple steps. The system scans new workpieces, identifies the required weld seams and gives the welder appropriate parameter suggestions for the welding process. In addition, having identified and localized known workpieces, the system then generates the welding program fully automatically. The welder can either make changes to the program on the user interface or have it executed immediately. Any desired changes are learned by the system and taken into account in subsequent tasks.

Several applications are realized with a two-arm robot that acts similarly to a human worker. Thus, there is no need for clamping or positioning, which makes for an especially cost-effective solution. SMErobotics uses the two-arm robot to demonstrate the welding of large components, such as for the construction sector. The robot can move the components with both arms and hold them with one arm while welding with the other arm. Two-armed assembly is demonstrated using the example of gearbox components as well as components from the aerospace industry. Sensor-monitored skills allow the robust execution of insertion and screwing operations, while powerful 3D sensors enable components to be located and picked up from positions inside the workspace that are only approximately known.

That assembly processes with tolerances in the micrometre range are also possible is demonstrated by the precision assembly of an entire component group without the need for complex, product-specific fixtures. The cell, which is currently being trialled by an end user and is planned for future use in regular production, is capable of assembling e.g. valve modules in several consecutive steps. This also includes the insertion of a spool with a tolerance of just three micrometres. Precise object recognition and localization allow secure gripping of loose components from bins as well as accurate navigation to the assembly site, while sensitive sensors and selectively compliant motions make for clamping-free assembly. Tests reveal a 30% lower error rate in assembly of the spool than with current manual execution. 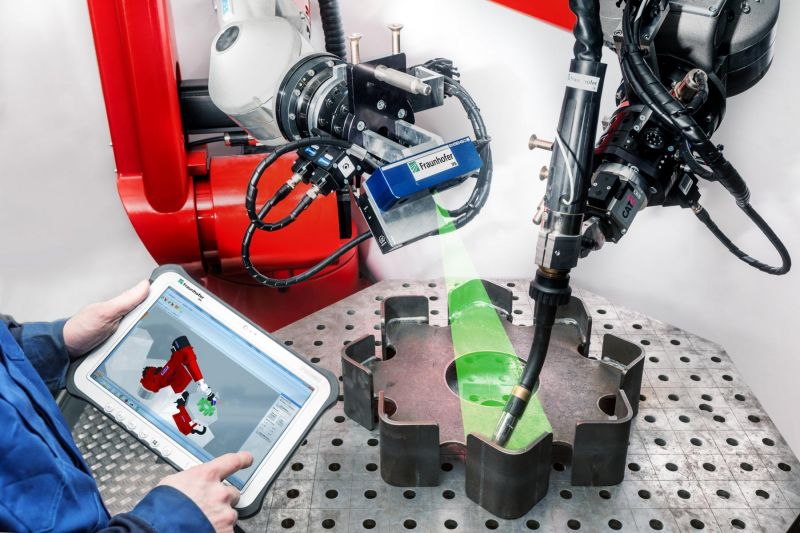 The stand at the fair will also feature five other demonstrators of technology components and collaborative workstations as well as the online tool www.robotinvestment.eu. This tool enables end users to quickly calculate the cost of a robot system as well as their return on investment. In addition, system integrators can also be directly contacted if there is interest. The tool provides companies with an overview of the options and opportunities for an automation solution as well as an initial decision-making basis.