The analysis of atomic spectra is of fundamental importance for our understanding of atomic structures. Until now, researchers were unable to examine heavy elements with optical spectroscopy because these elements do not occur in nature and cannot be artificially created in weighable amounts. However, scientists have now looked for the first time into the inner structure of heavy elements. For this they used short-lived nobelium atoms with a nuclear charge of Z=102, which had been produced at the GSI accelerator facility. Using laser spectroscopy the researchers investigated individual atoms of nobelium and discovered a variety of excited states. The experiment was conducted by an international collaboration under the leadership of the department Superheavy Elements Physics at GSI Helmholtzzentrum für Schwerionenforschung. The collaboration included scientists from GSI, Johannes Gutenberg University Mainz (JGU), and the Helmholtz Institute Mainz (HIM). The researchers reported their findings in the scientific journal Nature. 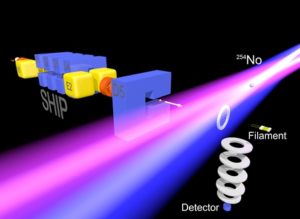 We know the energy spectra of most of the 118 elements that have been discovered to date. However, scientists were previously unable to experimentally investigate the elements beyond fermium (transfermium elements), which have more than 100 protons in the nucleus and the same number of electrons in their electron shells. Research is hampered by the fact that the inner structure of these atoms is greatly influenced by the relativistic effects caused by the high speeds at which the electrons orbit atomic nuclei with such high proton numbers and by the interactions between the many electrons. Like the other transfermium elements, nobelium is very hard to investigate experimentally. Nobelium does not occur in nature and can only be produced artificially in very small numbers of atoms. As a result, the element’s properties and inner structure are largely unknown.

An extremely sensitive method, which had been developed by the group of Professor Hartmut Backe und Dr. Werner Lauth at the Institutes of Physics and of Nuclear Physics at Johannes Gutenberg University Mainz in the early 1990s, was now used to detect and characterize excited states of nobelium atoms for the first time.

“At the GSI accelerator facility, we bombarded thin films of lead with calcium projectiles in order to create the isotope nobelium-254 by fusing the atomic nuclei of the reaction partners. We then used the SHIP separator to isolate the nobelium isotopes, which enabled us to irradiate them with laser light,” writes Professor Michael Block, head of the department Superheavy Elements Physics, GSI, and head of the section Superheavy Elements Physics, HIM, about the experiment. The team determines the energy transitions in the electron shell by varying the energy of the irradiating laser light. If the transition energy is correct, the laser light is absorbed and an electron is removed from the atom, turning it into a positively charged ion. This ion can then be clearly identified on the basis of its radioactive decay. “The experiment unit is so sensitive that only about four atoms need to be created per second for our experiments. The radioactive nobelium atoms exist for only 50 seconds before they decay again,” says Dr. Mustapha Laatiaoui, GSI scientist heading the experiment.

After the researchers had measured the first atomic transition in nobelium-254, they were able to extend their investigations to the even shorter-lived isotope nobelium-252, which can be created at only one fifth the rate of nobelium-254. The measurement of the energy shift of an atomic transition between different isotopes provides information about the size of their respective nuclides.

For the first time the experiments allowed measuring the atomic structure of a transfermium element, i.e., the element nobelium (Z=102), with laser spectroscopy. The extremely high precision with which the energies of the atomic states were measured during the laser experiments provides a basis for further theoretical work and opens up new perspectives for future high-precision experiments for the measurement of the atomic and nuclear properties of the unstable nuclides of super-heavy elements.