SUNY Polytechnic Institute and Norsk Titanium AS today announced the first MERKE IV™ Rapid Plasma Deposition™ (RPD™) machine has been shipped from Norway to the company’s new U.S. headquarters and manufacturing plant currently under construction in Plattsburgh, New York. The MERKE IV™ enables production of titanium components that have equivalent strength to forged parts but are delivered more inexpensively and efficiently, with unprecedented design-to-market speeds. Delivery of the cutting edge production machine represents the next phase of the partnership between New York State, SUNY Poly and Norsk Titanium, which is expected to create nearly 400 jobs and over $1 billion in investments over the next ten years. 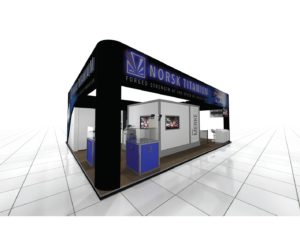 “Today’s announcement is a significant next step in the development of Norsk’s U.S. headquarters and manufacturing plant, and has been made possible by Governor Andrew Cuomo and his leadership in building upon Albany’s nanotechnology-based public-private partnership model, which is luring new innovation-based industries to our state and driving unparalleled economic development opportunities,” said SUNY Poly President and CEO Dr. Alain E. Kaloyeros. “SUNY Poly is thrilled to partner with Norsk and spur the creation of hundreds of jobs, as well as workforce education programs, which will ensure New York State’s workforce will be prepared to find successful long-term careers within this exciting industry.”

“Our New York team is excited and ready for the arrival of the first MERKE IV™ machine in Plattsburgh,” said Norsk Titanium Senior Vice President of Operations, Chris Bohlmann. “We have been working around the clock to prepare our facilities for a smooth ramp-up process as the first lot of 20 Rapid Plasma Deposition™ machines arrive in sequence.”

“The incredible vision and diligence of the New York team, including Governor Cuomo, SUNY Poly, the Norsk Titanium US and Norway teams and the people of the great city of Plattsburgh have led to this milestone,” said Norsk Titanium President & Chief Executive Officer Warren M. Boley, Jr. “The first revolutionary machine responsible for fundamentally changing the way airplanes are designed and built has shipped and is on its way to Plattsburgh, New York, right now.”

Norsk’s pioneering, proprietary RPD™ process, running on up to 40 MERKE IV™ machines, will power production of titanium components that can cost from 50 to 75 percent less than other equivalent components. The novel RPD™ process feeds titanium wire into a set of plasma torches protected by a cool argon environment that has made it possible to replace massive forged parts, which take months and even years to develop and produce, with precision, additive manufactured components. One MERKE IV™ production machine weighs 11 metric tons and takes several weeks to assemble upon arrival. The first machine is currently en route from Norway and scheduled for delivery in Plattsburgh on September 23, 2016. The Norsk manufacturing plant is scheduled to come online in 2017.

The partnership is expected to create nearly 400 jobs, with a $125 million investment by New York State for the siting and construction of the manufacturing center leveraging an expected $875 million in investments and spending by Norsk over the next ten years. Additionally, SUNY Poly will aid Norsk with the recruitment and training of members of the workforce who will staff the facility, leveraging the institution’s expertise in providing an unparalleled, extremely relevant, high-tech education to be able to meet production demands as Norsk’s U.S. headquarters ramps up. SUNY Poly will also assist Norsk in efforts to locate supply chain, downstream, and other supporting companies in the Plattsburgh region, benefitting numerous surrounding industries and jobs.

About Norsk Titanium AS

SUNY Polytechnic Institute (SUNY Poly) is New York’s globally recognized, high-tech educational ecosystem, formed from the merger of the SUNY College of Nanoscale Science and Engineering and SUNY Institute of Technology. SUNY Poly offers undergraduate and graduate degrees in the emerging disciplines of nanoscience and nanoengineering, as well as cutting-edge nanobioscience and nanoeconomics programs at its Albany location and undergraduate and graduate degrees in technology, including engineering, cybersecurity, computer science, and the engineering technologies; professional studies, including business, communication, and nursing; and arts and sciences, including natural sciences, mathematics, humanities, and social sciences at its Utica/Rome location. For information visit www.sunycnse.com and www.sunypoly.edu.