Now anyone, young or old, can explore the world like a true scientist, with curiosity and a thirst for discovery. The award-winning PocketLab, a platform that enables hands-on science investigations, through easy-to-use, inexpensive wireless sensors and apps, launched PocketLab Voyager and PocketLab Weather on Kickstarter last week. Within three days of the launch, the Kickstarter campaign eclipsed its fundraising goal and is on track to raise more than $100,000 by December 14. PocketLab Voyager and PocketLab Weather are wireless multi-sensors for exploring the impact of climate change, the flight of data of a drone, how to program a robot, and much, much more.

Tens of thousands of users in more than 45 countries are already using PocketLab in maker projects and science experiments. PocketLab Voyager and PocketLab Weather will further give kids, parents, teachers, makers and the simply curious, the ability to answer questions about the world around them. 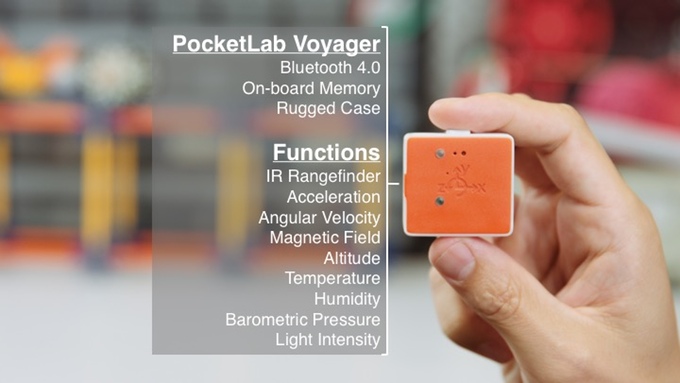 PocketLab Voyager is an all-in-one science lab that is capable enough for a professional engineer and simple enough for a fourth grade student. Voyager can measure motion, light, magnetic field, and weather, and can connect to an external temperature probe. Attach PocketLab Voyager to a drone to measure the altitude and vibrations during a flight, put it inside a football to measure the rotation of a spiral throw, design and build rubber-band cars and measure their speed during a race—with PocketLab Voyager, science exploration is only limited by your imagination.

PocketLab Weather is a rugged weather center that can measure temperature, humidity, light, barometric pressure, heat index, dew point, and can connect to an external temperature probe. Build a weather balloon and use PocketLab Weather to gather climate data as it travels for days through the sky, discover why lightning strikes by observing changes in atmospheric data during a storm—with PocketLab Weather, you can be a true citizen scientist, contributing your data and discoveries to global experiments on weather and climate change.

Ready to start exploring?  Both PocketLab Voyager and PocketLab Weather are now available for preorder on Kickstarter until December 14 at prices ten times less than competitive sensor bundles.

“If you have a device that’s easy to use and inexpensive and durable, what kind of science experiments would people build and try out?” said Clifton Roozeboom, CEO and founder of Myriad Sensors Inc., the makers of PocketLab. “That’s the whole point of science, to explore what’s not known.”

Myriad Sensors’ first PocketLab sensor raised $114,000 on Kickstarter in April 2015 and customers received their PocketLabs that summer. PocketLab has since been adopted by thousands more users for all kinds of science and maker projects. In the state of Nevada, 1,800 PocketLabs were distributed to middle school science teachers as part of an initiative to bring more technology into classrooms.

“We’re happy to be working with PocketLab on sensors that augment Science Journal”, said Jen Phillips of Google’s Making & Science team. “We like PocketLab because it’s easy to use and can help inspire future scientists and makers.”

With both PocketLab Voyager and PocketLab Weather you can record measurements with on-board memory or transmit data hundreds of feet using Bluetooth. Both Voyager and Weather devices connect to the PocketLab app available on almost any device.

The PocketLab app works with programs like Scratch for programming education, Google’s Science Journal for maker projects, a developer API for building programs, and LEGOs for robot building. Using the upcoming PocketLab Cloud, you can map your experiments and collaborate with other PocketLab users.

Myriad Sensors, Inc., located in Mountain View, California, is an angel funded start up company that is the maker of the PocketLab educational platform, and has won awards from Yale University, Stanford University, ProtoLabs, and the Intel Education Accelerator, and has received funding from Incubic Management, Intel Capital, and the National Science Foundation. For more info, visit www.thepocketlab.com