The Europe 2020 strategy, adopted by the European Council in June 2010, is the European Union’s agenda for jobs and growth for the current decade. As a main objective, the strategy strives to deliver high levels of employment, productivity and social cohesion in the Member States, while reducing the impact on the natural environment. To reach this objective, the EU has adopted targets to be reached by 2020 in five areas: employment, research & development (R&D), climate change & energy, education and poverty reduction. These have been translated into national targets in order to reflect the situation and possibilities of each Member State to contribute to the common goal. A set of nine headline indicators and additional sub-indicators, compiled by Eurostat, give an overview of how close the EU is to its overall targets.

The radar chart below presents the current situation of the EU by showing the progress made since 2008 and the
distance still to cover towards the Europe 2020 key targets. 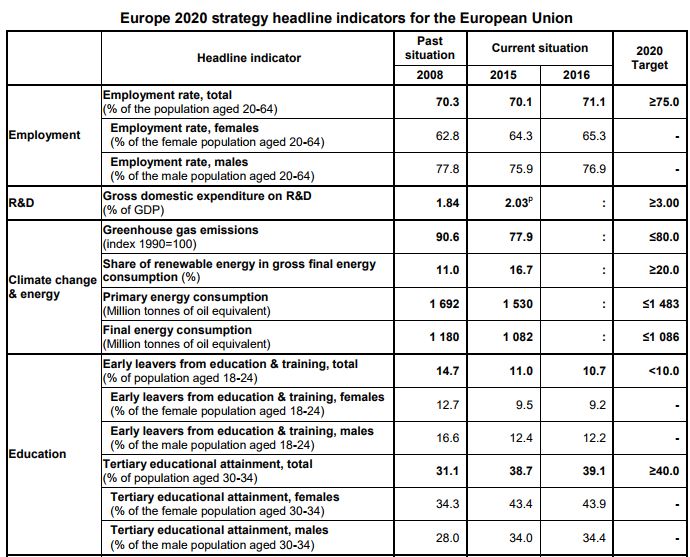 Methods and definitions
The employment rate is the number of employed persons in a given age group (people aged 20-64 in the Europe 2020 strategy) as percentage of the total population of the same age group.

Greenhouse gases constitute a group of gases, among which carbon dioxide (CO2), nitrous oxide (N2O) and methane (CH4), contributing to global warming and climate change. Converting them to carbon dioxide (or CO2) equivalents makes it possible to compare them and to determine their individual and total contributions to global warming. The indicator includes international aviation and indirect CO2, but excludes emissions from land use, land use change and forestry.

Renewable energy sources, also called renewables, are energy sources that replenish (or renew) themselves naturally, such as solar, wind, and tidal energy.

Primary energy consumption measures the total energy demand of a country. It covers consumption of the energy sector itself, losses during transformation (for example, from oil or gas into electricity) and distribution of energy, and the final consumption by end users.

Final energy consumption is the total energy consumed by end users, such as households, industry and agriculture. It is the energy which reaches the final consumer’s door and excludes that which is used by the energy sector itself.

The indicator ‘early leavers from education and training’ is defined as the percentage of the population aged 18-24 with at most lower secondary education (according to the International Standard Classification of Education) and who were not in further education or training during the last four weeks preceding the survey.

The indicator related to tertiary educational attainment is defined as the percentage of the population aged 30-34 who have successfully completed tertiary studies (e.g. university, higher technical institution, etc.) as defined in the International Standard

Severely materially deprived persons have living conditions constrained by a lack of resources and experience at least 4 out of the 9 following deprivation items: cannot afford 1) to pay rent/mortgage or utility bills on time, 2) to keep home adequately warm, 3) to face unexpected expenses, 4) to eat meat, fish or a protein equivalent every second day, 5) a one week holiday away from home, 6) a car, 7) a washing machine, 8) a colour TV, or 9) a telephone (including mobile phone).

People living in households with very low work intensity are those aged 0-59 who live in households where on average the adults (aged 18-59) worked less than 20% of their total work potential during the past year. Students are excluded.