The European Union and Japan have reached to an agreement in principle on the main elements of an Economic Partnership Agreement.

This will be the most important bilateral trade agreement ever concluded by the EU and as such will for the first time include a specific commitment to the Paris climate agreement. 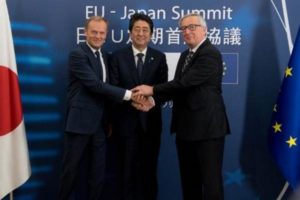 For the EU and its Member States, the Economic Partnership Agreement will remove the vast majority of duties paid by EU companies, which sum up to €1 billion annually, open the Japanese market to key EU agricultural exports and increase opportunities in a range of sectors. It sets the highest standards of labour, safety, environmental and consumer protection, fully safeguards public services and has a dedicated chapter on sustainable development. It also builds on and reinforces the high standards for the protection of personal data that both, the EU and Japan, have recently entrenched in their data protection laws.

President Juncker said: “Today we agreed in principle on an Economic Partnership Agreement, the impact of which goes far beyond our shores. Through this agreement, the EU and Japan uphold their shared values and commit to the highest standards in areas such as labour, safety, environmental or consumer protection. Working towards mutual adequacy decisions, we also make a strong commitment to uphold the fundamental right of data protection. Together, we are sending a strong message to the world that we stand for open and fair trade. As far as we are concerned, there is no protection in protectionism. Only by working together will we be able to set ambitious global standards. This will be the message that the EU and Japan will bring together to the G20 tomorrow.”

Commissioner for Trade Cecilia Malmström added:“This agreement has an enormous economic importance, but it is also a way to bring us closer. We are demonstrating that the EU and Japan, democratic and open global partners, believe in free trade. That we believe in building bridges, not walls. With Japan being the fourth largest economy of the world with a big appetite for European products, this is a deal that has a vast potential for Europe. We expect a major boost of exports in many sectors of the EU economy.”

Phil Hogan, Commissioner in charge of Agriculture and Rural Development said: “This is a win-win for both partners, but a big win for rural Europe. The EU-Japan Economic Partnership Agreement is the most significant and far-reaching agreement ever concluded in agriculture. Today, we are setting a new benchmark in trade in agriculture. Tariffs on wine exports will disappear from day one of entry into force. For wine producers this means a saving of €134 million a year. Equally the Austrian Tiroler Speck, the German Münchener Bier, the Belgian Jambon d’Ardenne, the Polska Wódka as well as over 200 other EU Geographical Indications will now enjoy the same level of protection in Japan that they have in Europe.”

The Economic Partnership Agreement will increase EU exports and create new opportunities for European companies, big and small, their employees and consumers. The value of exports from the EU could increase by as much as €20 billion, meaning more possibilities and jobs in many EU sectors such as agriculture and food products, leather, clothing and shoes, pharmaceuticals, medical devices and others.

With regards to agricultural exports from the EU, the agreement:

– scraps duties on many cheeses such as Gouda and Cheddar (which currently are at 29.8%) as well as on wine exports (currently at 15% on average);

– will allow the EU to increase its beef exports to Japan substantially, while on pork there will be duty-free trade in processed meat and almost duty-free trade for fresh meat;

– ensures the protection in Japan of more than 200 high-quality European agricultural products, so called Geographical Indications.

– guarantees EU companies access to the large procurement markets of Japan in 48 large cities, and removes obstacles to procurement in the economically important railway sector at national level;

– protects sensitive economic sectors of the EU, for instance in the automotive sector, with transition periods before markets are opened.

The agreement will also strengthen Europe’s leadership in shaping globalisation and the rules of global trade according to our core values and will safeguard the EU’s interests and sensitivities. In doing so, it contributes to address some of the challenges identified in the reflection paper on Harnessing Globalisation presented by the Commission as part of the White Paper process.

Today’s agreement in principle covers most aspects of the Economic Partnership Agreement. In some chapters technical details still need to be ironed out, and there are also chapters that remain outside the scope of the agreement in principle. For instance, on investment protection. The EU has put its reformed Investment Court System on the table and will reach out to all our partners, including Japan, to work towards the setting up of a Multilateral Investment Court. Other areas that require further work include regulatory cooperation and the general and institutional chapters.

Based on today’s agreement in principle, negotiators from both sides will continue their work to resolve all the remaining technical issues and conclude a final text of the agreement by the end of the year. Then, the Commission will proceed to the legal verification and translation of the agreement into all EU official languages, and will consequently submit it for the approval of EU Member States and the European Parliament.

Infographics and thematic factsheets on the EU-Japan Economic Partnership Agreement

The agreement in principle – report submitted to Member States

Transparency in the negotiations: meetings and documents

More on trade relations between the EU and Japan