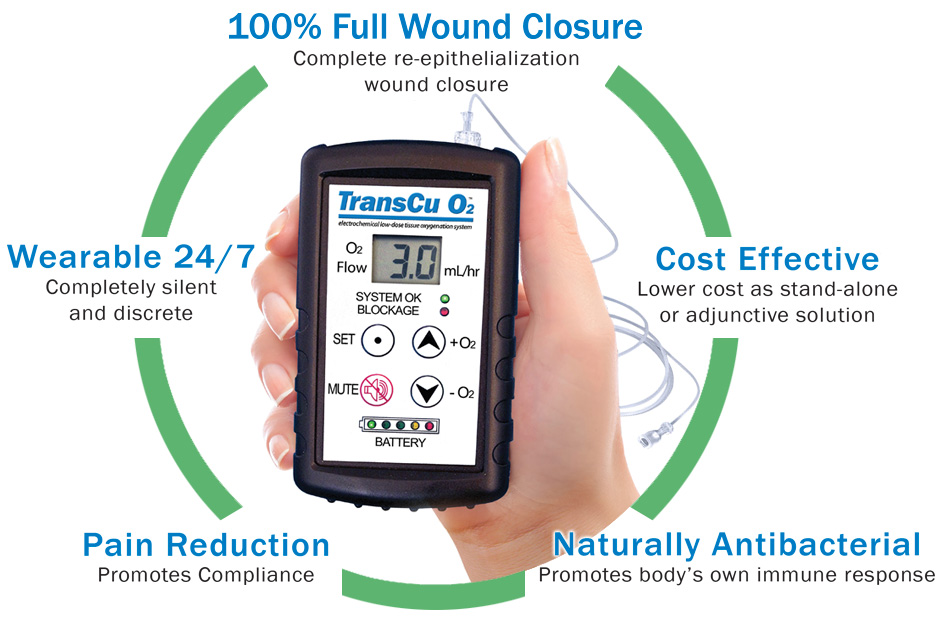 TransCu O2 is a wearable system that provides a continuous flow of humidified oxygen to a moist wound for 24 hours a day. It is small, simple, easy to use and allows for constant treatment without limiting mobility.

“We supported four study publications last year and currently have 945 patients in our patient registry,” EO2 President Joseph Moffett said. “EO2 Concepts has committed itself to developing the right kind of collaborative research data to meet the demands of the evolving evidence-based healthcare system.”

The trial, completed in November 2016, is part of the company’s ongoing effort to conduct research and obtain the highest level of evidence a medical device can achieve. Moffett expects complete study data to be published soon in a leading peer-reviewed journal.

More than 10 million Americans suffer from non-healing wounds such as pressure ulcers, skin grafts and burns, according to the Agency for Healthcare Research and Quality. Roughly 1 million new cases of diabetic foot ulcers and venous leg ulcers are diagnosed each year. Oxygen plays a pivotal role in wound healing and CDO is one of the most targeted approaches in wound care today.

The treatment is a key part of efforts to reduce the negative effects of diabetes. Diabetic foot ulcers cost more to treat than the five costliest forms of cancer. In addition, 50 percent of diabetic wounds get infected and every 20 seconds someone undergoes an amputation due to diabetic complications, according to Dr. David G. Armstrong, director of the Southern Arizona Limb Salvage Alliance (SALSA).

Armstrong is widely known for his work in amputation prevention. He has produced hundreds of peer-reviewed manuscripts and authored nearly 100 book chapters.

“Technology like (TransCu O2) has previously shown some potential to have a positive healing impact,” said Armstrong, who also is a professor of surgery at the University of Arizona. “It’s frankly inspiring that EO2 Concepts and all of the study sites and investigators worked to complete a study like this, because it’s complicated to do blinded device trials and theirs is one of the few that has been seen through to completion.”

EO2 additionally has collected real-world results on patients over the last several years in its clinical registry. This data shows that CDO can close wounds in 59 days that have been open for an average of 359 days prior to receiving CDO and, in most cases, have been unresponsive to other advanced therapies.

EO2’s Tier One study gives additional credence to other less rigorous studies that have shown similar results. For instance, Dr. Gabriel Urrea-Botero, a wound care specialist at Gonzaba Medical Group in San Antonio, also discovered that when he used CDO on 20 of his patients who were suffering from unresponsive toe ulcers, they healed faster.

“This therapy deserves attention as a viable treatment option,” said Urrea-Botero in a PodiatryToday.com publication that reported his findings. “I believe the TransCu O2 oxygen delivery system may be appropriate not just in the clinical scenarios, but also as a first-line treatment for other chronic wounds. There is an emerging body of credible clinical evidence for this modality. Overall, the patients reported the system to be more convenient than other systems and particularly liked that the device is silent and allows for mobility.”

EO2 is a privately held, advanced wound-care technology company and the developer of a progressive, FDA-cleared Class II medical device that provides therapy to difficult-to-heal wounds. The TransCu O2 System is an electrochemical tissue oxygenation and wound monitoring system for use with OxySpur™ Oxygen Diffusion Dressings as an adjunctive therapy to continuously treat oxygen-compromised wounds. For more information, visit www.eo2.com.