In winter, when the sun sets earlier in the afternoon, people are happy to catch every last sunbeam. On hot summer days, however, office workers are keen to do without extra heat from the sun. Electrochromic glass offers a solution: When it’s gloomy outside, the glass remains transparent and lets through light and heat. But when the sun is blazing, the windows darken to keep most of the heat outside. These panes shimmer in a lovely shade of blue – up to now, other colors were not possible. 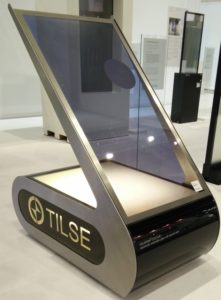 Researchers at the Fraunhofer Institute for Applied Polymer Research IAP in Potsdam-Golm, in cooperation with TILSE FORMGLAS GmbH, have now developed a new manufacturing method for such electrochromic glass panes. The project is sponsored by the German Federal Ministry for Economic Affairs and Energy (BMWi). “Not only can we manufacture panes of glass in a wide range of colors, but we also achieve a much faster switching time than previous models,” says Dr. Volker Eberhardt, a scientist at Fraunhofer IAP.

How do electrochromic panes work? In most cases, manufacturers use glass that has been coated with a thin film of translucent indium tin oxide or the less expensive fluorine-doped tin oxide. This coating makes the glass electrically conductive. Two panes are required to make a smart window pane. First, one of the panes receives a second, vapor-deposited coating consisting of electrochromic tungsten oxide. Next, the panes are layered on top of each other with the coatings facing each other and a gel-like electrolyte in between. When a voltage is applied to the glass, the tungsten oxide coating darkens. When the polarization is reversed, the pane brightens again. This takes time – in the case of large windows of two to three square meters, it may take up to 15 to 20 minutes before the pane is completely darkened.

Fraunhofer IAP’s researchers are focusing on a different technology to darken the panes. “We use organic monomers that have been mixed into specially developed resin,” says Eberhardt. Although the researchers are using glass panes coated with tin oxide as an initial substrate, just like existing processes do, they are skipping the second coating. Instead, they layer the panes with the tin oxide coating facing inwards and fill the space between them with the resin and electrochromic molecule mix. The resin is then cured using heat or UV radiation. Next, the researchers apply direct current to ensure that the monomers on an electrode bond to form an electrochromic polymer.

This means that the pane can be switched at a significantly lower voltage. Meanwhile, using an organic colorant offers various advantages. For one thing, by selecting other monomers, it will be possible to install red or purple panes in the future. Furthermore, monomers react significantly faster. “A 1.2-square-meter pane can darken in just 20 to 30 seconds; the standard tungsten-oxide-based electrochromic system would take at least ten minutes for that,” says Eberhardt.

Sturdiness is also a point in favor for the new process. “We tested the stability of our new electrochromic panes in accordance with applicable DIN standards. Even a pane comprising just two layers is sturdy enough for use as overhead glazing or in surfaces meant to be walked on. Previously you needed many more for that,” says Eberhardt. With the special resin, this means that it is possible to save on material costs because only two panes are needed instead of three or four. For the first time, these can also be electrochromically switched. Furthermore, the glass is also suitable for ship building. The researchers have already produced a prototype of the electrochromic resin glazing. While their current prototype switches to blue, in the next step researchers plan to implement other colors such as red.