Empa researchers have achieved a milestone in the search for a solid electrolyte, the conductive medium for future solid-state batteries. On the one hand, this material must be highly conductive for lithium ions, and on the other hand manufacturing costs should be as low as possible. Ultra-thin layers of a special ceramic (chemically speaking, Li7La3Zr2O12) should make the production of high-performance solid-state batteries possible in the near future. 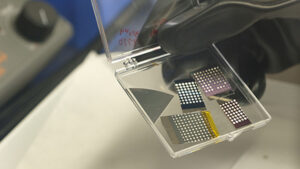 The LLZO ceramic is integrated into these test batteries. There is an enormous potential for everyday electronics. Image: Empa

Lithium-ion batteries may pose a risk because of the flammable liquid inside them. However, this electrolyte could be replaced in future by an incombustible, heat-resistant solid. In addition to the improved safety of such batteries, a better performance and a longer service life would be major advantages.

Yaroslav Romanyuk’s research team at Empa is focusing on thin-film technologies for the development of these new solid-state batteries. The electrolyte in such a battery has to meet various criteria: It must be highly conductive for lithium ions and at the same time capable of being produced as cheaply as possible on an industrial scale.

From lumps to ultra-thin layers

The ceramic compound LI7La3Zr2O12 (or LLZO for short) exhibits the appropriate properties and was the focus of a research project by Jordi Sastre, a PhD student at Empa. This ceramic has so far been produced for research purposes in the form of so-called pellets, the size of which is limited to a few centimeters in diameter. For use in batteries, these pellets first have to be elaborately polished – a time-consuming process, which is associated with high material losses. This method is therefore unsuitable for industrial production.

An ultra-thin LLZO layer would just be the solution; it would also have the advantage to allow lithium ions to flow through the electrolyte more quickly – thus increasing the battery’s performance. Using a method called magnetron sputtering, Sastre has now succeeded in producing an ultra-thin film of LLZO ceramic. The thickness of this film is in the range of 500 nanometers. For comparison, the diameter of a human hair is in the range of 40,000 to 100,000 nanometers, i.e. it is about 100 times thicker than the ceramic layer.

Measurements on the ultra-thin material layer showed a significantly higher conductivity compared to previously known materials. Solid-state microbatteries based on lithium-phosphorus-oxynitride (LiPON), an amorphous, glass-like material, are already available today. The conductivity of the LLZO thin film developed at Empa exceeds the conductivity of LiPON films by more than a 100-fold.

At the same time, Empa researchers always kept in mind the simple, large-scale production of the LLZO microfilm. The thin films can be produced at temperatures of 600 to 700 degrees Celsius, compared to the LLZO pellets known to date, which require more than 1100 degrees Celsius. This makes the process faster, cheaper and more reliable.

In a next step, the researchers were already able to test the material in a lab version of a thin-film battery. And indeed, the new LLZO thin film also showed a much higher conductivity in this test battery than the previously known LiPON batteries.