The emerging field of plasmonics could bring advances in chemical manufacturing, usher in new clean and sustainable technologies and desalination systems to avert a future global water crisis.

“Plasmonics offers the ultimate control over light and photochemistry, with the help of metallic nanostructures capable of concentrating electromagnetic energy into nanoscale volumes,” said Vladimir M. Shalaev, Purdue University’s Bob and Anne Burnett Distinguished Professor in Electrical and Computer Engineering. “It may have a transformative impact on the way we will drive, manipulate, enhance, and monitor chemical processes in the future.”

The potential for practical applications is discussed in a commentary to appear on Friday (June 2) in the Perspectives section of Science magazine. The article was written by visiting scientist Alberto Naldoni; Shalaev; and Mark Brongersma, a professor in the Department of Materials Science and Engineering at Stanford University. 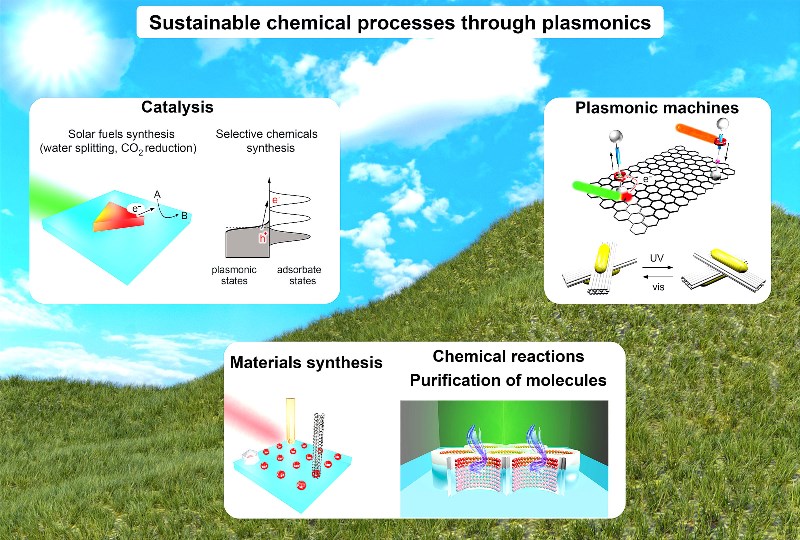 Surface plasmons and “resonant nanostructures” might be harnessed for the ultra-efficient manufacture of chemicals and fuels. One example is the potential use of these nanostructures combined with semiconductor devices that harvest light to perform catalysis.

When semiconductors are illuminated, electrons are said to be “excited,” moving from one energy level, or band, to another and leaving behind “holes.” Surface plasmons are groups of electrons that collectively become excited and then “decay,” or lose energy, re-emitting photons or highly energetic, “hot,” electrons and holes. These hot electrons can be used to drive chemical reactions.

Innovations in plasmonics could make it possible to explore new types of chemistry that are typically only possible at high temperatures and pressures. The surface plasmons cause “local heating,” which holds promise for applications such as chemical separation and distillation for industrial processes, and saltwater desalination.

“The world is facing a freshwater crisis, and cheap, efficient production of freshwater from saltwater would mean an end to this global challenge,” Shalaev said. “Plasmonic nanoparticles can be self-assembled inside the nanochannels of a membrane that floats on water. Upon irradiation, the plasmonic device absorbs more than 96 percent of the solar spectrum and focuses the absorbed energy in nanoscale water volumes, enabling steam generation and efficient desalination.”

Plasmonics also might be combined with DNA to produce custom-made “three-dimensional metamolecules” and light-driven molecular robots for applications in chemistry, technology and medicine.

“Such plasmonic machines could be implemented for carrying out smart operations such as transport of molecules and information processing,” he said.

Scaling up plasmonic chemistry to the industrial level would require development of new alternative plasmonic materials, the use of “metasurfaces” and flexible nanophotonic platforms.

“The transition to a clean and sustainable society is already taking place,” Shalaev said. “Plasmonics can help accelerate this changeover by enabling, manipulating, enhancing, and monitoring chemical processes with atomic-scale precision and control.”