Cement production has to drastically reduce its environmental footprint. Empa researchers are, therefore working on alternative cement recipes that cause significantly fewer emissions or can even bind the greenhouse gas carbon dioxide.

It is the most widely used product in the world. Cement is indispensable yet its reputation has become quite tainted in the course of the ongoing climate debate. Mixed with water, sand and gravel, it results in concrete, on which our modern world is built. However, the frugal material is in the limelight primarily because of another property: The production of one ton of cement causes around 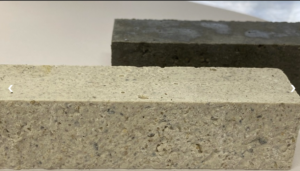 Magnesium oxide and hydromagnesite give the mortar its white colour. Image: Empa

700 kg of carbon dioxide (CO2) that is emitted in the atmosphere. This is less than in the case of, say, steel or aluminum production. But it’s the sheer quantity that makes the difference. Every year, we produce around twelve cubic kilometers of concrete worldwide, a quantity that could completely fill Lake Lucerne – every year anew. And the trend is rising.

The share of global CO2 emissions caused by the cement industry is currently around seven percent. However, this is likely to increase in future, as demand is growing in Asia and increasingly also in Africa, while production in Europe is more or less stable. So it is high time to look for a cement that offers people housing and infrastructure, but still takes environmental aspects into account and can be produced in line with our climate targets. The United Nations Environment Program (UNEP) also calls for the immediate development and use of new cement-based materials that are more climate-friendly and at the same time cost-effective. Empa researchers are thus working on alternative types of cement and concrete that produce less harmful greenhouse gas or can even bind CO2.

“Cement is traditionally burnt in a rotary kiln at around 1450 degrees Celsius,” says Empa researcher Frank Winnefeld from Empa’s Concrete & Asphalt lab. Although fossil fuels can be replaced by alternative energies, “with an average degree of substitution of 50 percent with today’s technologies, the savings potential is already quite exhausted, at least in Europe,” says Winnefeld. However, more energy could be saved by using raw materials that require a lower burning temperature. A promising candidate is CSA cement made from calcium sulfoaluminate. It requires a firing temperature that is 200 degrees lower and emits around 200 kg less CO2per ton of cement. But the reduction in greenhouse gas emissions is not only due to the lower firing temperature. A large proportion of the climate advantage of CSA cement is due to the lower amount of limestone in the raw material mix.

Limestone is responsible for the bulk of CO2emissions through a chemical reaction during cement production. Thus, reducing the proportion of limestone is an interesting aspect in developing eco-cement. In addition to CSA cement, researchers look at substitute constituents that accumulate as waste materials in other industries.

These include slag from blast furnaces used in the production of pig iron and fly ash left over from coal combustion. Both products can be mixed with cement to help reduce CO2 emissions.

But these secondary raw materials cannot meet the industry’s gigantic demand. Empa researchers are, therefore, breaking new ground and identifying branches of industry whose residues are still little used. “The metallurgical recovery of precious metals from electronic waste leaves a high-quality slag that can also be mixed with cement in powder form,” explains Winnefeld. If the slag’s heavy metal content complies with the legal standards, this cement could also be used in Switzerland. The good news is that the sediment of the “urban mine” from the remains of our disused mobile phones and computers will continue to grow in the future. According to Winnefeld, it is also possible to use mineral construction waste for cement admixtures.

The type of additives in cement could even be changed in such a way that the burning process could be completely eliminated. In so-called alkali-activated cement, the components such as slag, ash or calcined clay are animated to the desired chemical reaction by strong alkaline solutions such as sodium silicates. The products of this reaction then combine to form a material whose compressive strength corresponds to that of burnt, conventional cement.

Concrete production is responsible for around 6% of man-made CO2emissions globally, in Switzerland even for 9%. In the do-it-yourself sector, concrete is mixed using simple rules of thumb. For example, 300 kg of cement, 180 l of water and 1890 kg of aggregate produce a cubic metre of concrete. The CO2emission of the concrete comes largely from the cement content: cement must be burnt at 1450 degrees, whereby mineral-bound CO2 dissolves from the limestone. Worldwide, 2.8 billion tonnes of cement are produced annually.

Climate gas caught up in concrete

The ability to bind CO2in concrete instead of releasing it is also an ingenious feature. A CO2-negative concrete would be a true climate friend. Empa researchers are working on a magnesium-based cement that will provide the basis for this eco-concrete. Resources for the raw material are available in regions where magnesium-containing olivine is found in the soil. The mineral is mainly found deep in the Earth’s mantle. However, if it is transported to the surface by volcanic activity, for example in Scandinavia, it can be degraded. In cement production from olivine, CO2is then added to the raw magnesium silicate. And since only part of the material is burnt in a subsequent processing step, overall less CO2is produced than was previously consumed. And although the product already bears a catchy name (“MOMS”, Magnesium Oxide derived from Silicates), its properties are still largely unexplored.

To ensure that such approaches do not end up as niche products, but can be produced industrially and costeffectively, meticulous analyses must show that eco-cement meets the same requirements as conventional products. Many alternative types of cement currently lack the simple recipes for adding new constituents or modifying manufacturing processes without compromising the coveted properties of traditional cement. For as long as the at least equivalent performance of eco-cement cannot be demonstrated beyond doubt, the classic Portland cement, a low-cost and well-characterized building material, will remain the material of choice for civil engineers.

Cement researchers at Empa are currently analyzing chemical mixing ratios and conformity criteria such as the strength and durability of new types of cement, paving the way for approvals that comply with standards. These include investigations on a small and gigantic scale. In addition to chemical investigations, microscopic analyses and thermodynamic modelling, with which the reactions inside cement are investigated, the load-bearing capacity of large components made of different types of cement is also compared. “Industrial processes will have to be optimized, as they are still too expensive in many cases,” says Winnefeld. It is clear, however, that alternative types of cement can be used to produce concrete with a comparable or even better durability.

In any case, one development is already emerging: The variety of cement and concrete products will increase in the future. For building material producers, this diversity leads to increased requirements. Moreover, Winnefeld is certain that the use of secondary raw materials would make local solutions more attractive if there were no transport routes, for example because suitable industrial residues are produced near a cement plant.