In 2014, enterprises located in the European Union (EU) made 17% of their total turnover from electronic sales to other businesses or consumers, compared with 12% in 2008. As in previous years, EU enterprises engaged more in e-purchases than in e-sales in 2014, with 40% having purchased online, while 19% made electronic sales during the same period.

E-commerce can offer businesses the opportunity to improve the efficiency of their production processes as well as the means for expanding beyond national borders and reaching customers (businesses or consumers) regardless of their geographical location. The European Commission aims at creating a Digital Single Market where ecommerce among Member States is as smooth as the sales of a traditional brick and mortar outlet within any country. In 2014, while 18% of EU enterprises sold electronically on their domestic market, e-sales abroad (so called “cross-border e-commerce”) were more limited: 8% sold online to customers in another EU Member State, and 5% to customers in non-EU countries. 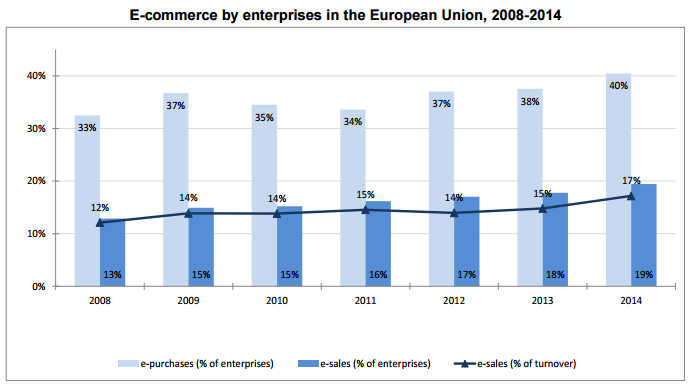 Among the EU Member States in 2014, electronic purchases were made by more than half of enterprises in Austria (68%), the Czech Republic (56%), Germany (54%), Finland and the United Kingdom (both 51%), while for esales, the share was lower in every Member State. It however concerned at least a quarter of enterprises in Ireland (32%), Sweden (28%), Denmark and Germany (both 27%), Belgium (26%), the Czech Republic and the Netherlands (both 25%). Regarding turnover generated from e-sales, Ireland was, among those for which data are available, the Member State registering the highest share (37% of total turnover of enterprises), ahead of the Czech Republic (30%), Slovakia, Finland and the United Kingdom (all 21%). At the opposite end of the scale, a limited share of turnover originated from e-sales in enterprises located in Greece (1%), Bulgaria (5%), Cyprus (6%) and Romania (8%), most of these Member States also having the lowest shares for both e-purchases and e-sales: Greece 11% and 7%, Bulgaria 13% and 9%, and Romania 14% and 8%. 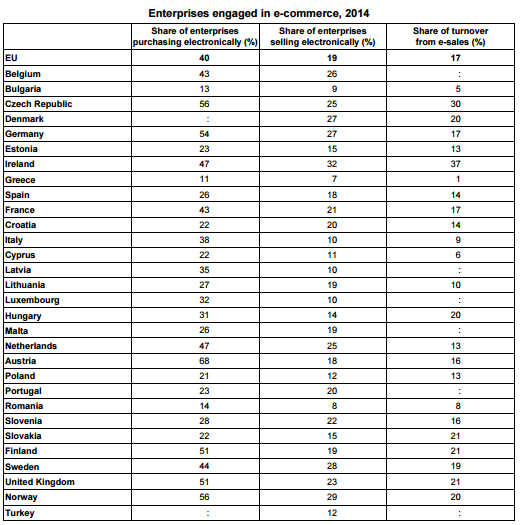 Ireland on top for cross-border e-commerce

These data come from a report issued by Eurostat, the statistical office of the European Union, and form part of the results of a survey conducted at the beginning of 2015 on ICT (Information and Communication Technologies) usage and e-commerce in enterprises.