Recent statistics for patent applications reveal that innovation in self-driving vehicles (SDV) is accelerating fast and could signal the coming of a transport revolution. The number of European patent applications related to automated driving has grown 20 times faster than other technologies in recent years, a study published today by the European Patent Office (EPO) finds. The study was carried out in co-operation with the European Council for Automotive R&D (EUCAR).

The study also shows that half of the top 25 companies active in this field at the EPO, including the top four applicants, are not traditional automotive/transport companies, but information, communication and technology (ICT) firms.

“This study provides a comprehensive picture of the trends in automated driving technologies as reflected in patents,” said EPO President António Campinos.“Automotive and digital technologies are both traditionally very innovative sectors and the report shows that there is a crossroads where the two sectors meet which is marked by significant changes in its patent landscape. As patents are filed ahead of the appearance of products in the market place, information from patents can offer unique insights into the direction a technology is heading, and which companies and countries are in the lead.” He added: “The study shows that Europe is well positioned in the key technologies related to self-driving vehicles.” 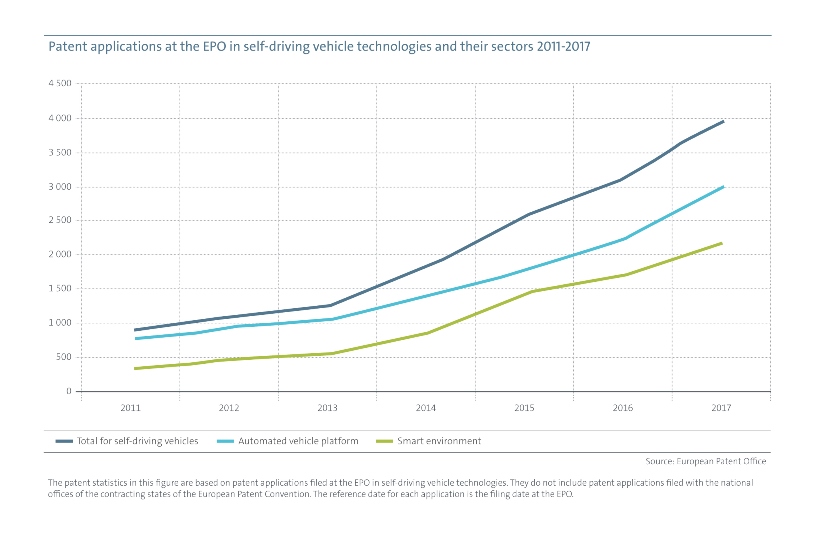 Drawing the map of the self-driving car patent landscape

Drawing on the expertise of its patent examiners and using state-of-the-art patent search tools, the EPO identified and categorised all European patent applications related to self-driving vehicles filed until the end of 2017. These 18 000 applications form the basis of a mapping of a new type of invention, which mixes features from ICT and established automotive technologies. For the purpose of the study, patent applications were divided into two main technology sectors: The first is Automated vehicle platform, encompassing technologies that are embodied in the vehicle itself including inventions that enable vehicles to make autonomous decisions (field of Perception, analysis & decision); inventions in the automated parts of the vehicle (Vehicle handling); and inventions in the underlying hardware and software technologies (Computing). The second sector, Smart environment, comprises technologies that enable self-driving vehicles to interact with each other and with their surroundings. It includes inventions in vehicle connectivity and related communication infrastructure (Communication) and inventions in traffic management, vehicle identification, automated parking, or interfaces between vehicles and the electricity grid (Smart logistics).

Innovation from a large number of companies

SDV inventions originate from hundreds of different companies operating in a wide variety of industries. The study finds that almost 50% of the SDV applications filed by the top 500 applicants at the EPO in the period 2011-2017 originate from firms operating in what the study categorises as “Automotive” (29.3%), “Other transport” (7.7%) or related “Machinery & electrical equipment” (12.1%) industries. These companies have a clear lead in the technology field of Vehicle handling, and strong positions in Smart logistics, Perception, analysis & decision and Computing, as defined in the study. Businesses specialised in information and communication technologies (ICT for automotive) and Telecommunications respectively filed 32.8% and 13.6% of the SDV applications at the EPO. They have their strongest positions in the fields of Communication and Computing technology.

Europe and the US are innovation leaders

A breakdown by regions shows that Europe and the US have a strong lead in innovation: since 2011, they have each accounted for around a third of all self-driving vehicle patent applications at the EPO (approx. 1 400 patent applications each in 2017 alone), well head of Japan (13%), Korea (7%) and China (3%). European companies stand out in the fields Vehicle handling, Smart logistics, and Perception, analysis & decision. US applicants dominate in Communication and Computing technologies. Within Europe, self-driving vehicle innovation largely comes from Germany, with 14.4% of all applications in self-driving vehicles in 2011-17 (and with more than 500 patent applications in 2017 alone). However, France (4.8%) and Sweden (4.7%), and to a lesser extent the UK (2.9%) and the Netherlands (2.8%), also show significant innovative activity.

Patent strategies behind ‘smartphones on wheels’

Patents play an important role in developing automated driving technologies. They secure the development and commercialisation of inventions, and are instrumental in building new licensing and collaboration arrangements between different technology specialists. The study finds that patent protection strategies in the area of self-driving vehicle technology more closely resemble those in the ICT sector than those in the traditional automotive industry. Applicants aim for broad protection with significantly larger “patent families”. Protection is also more frequently sought with regional (EPO) or international patent offices (Patent Cooperation Treaty route), and spans a larger number of jurisdictions on average, suggesting that broad international protection is even more important in the automated vehicle market.

About the European Patent Office

With nearly 7 000 staff, the European Patent Office (EPO) is one of the largest public service institutions in Europe. Headquartered in Munich with offices in Berlin, Brussels, The Hague and Vienna, the EPO was founded with the aim of strengthening co-operation on patents in Europe. Through the EPO’s centralised patent granting procedure, inventors are able to obtain high-quality patent protection in up to 44 countries, covering a market of around 700 million people. The EPO is also the world’s leading authority in patent information and patent searching.