For Dr. Fabian Dembski, who works at the intersection of architecture, city planning, and computational science, cities are more than just the places we live. They function like living organisms, growing and changing over time. From this perspective, decisions made in city planning can either improve or degrade the health of urban spaces. 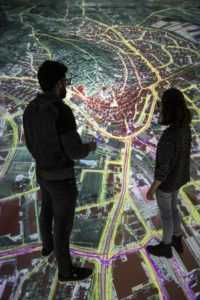 HLRS researchers have been using a combination of data and 3D modelling to develop a digital twins of the city of Herrenberg. CREDIT Fabian Dembski, HLRS.

As cities have gotten larger and more complicated, and technology has opened up new ways of observing and simulating cities’ dynamic processes, researchers have tried to find new ways to make city planning decisions more efficient, equitable, and inclusive. Much like CT scans gave medical professionals new ways of observing the human body, advanced digital approaches involving data-driven modelling and visualization now offer researchers new ways of understanding how cities function and predicting how changes in their design could affect life there.

Together with investigators at the Fraunhofer Institute, the University of Stuttgart, and Kommunikationsbüro Ulmer, Dembski and other researchers at the High-Performance Computing Center Stuttgart (HLRS) have been developing new applications of 3D visualization to support urban planning. Specifically, the team has been adapting the concept of the “digital twin” for cities, using high-performance computing (HPC) technologies for analyzing, integrating, and visualizing data describing urban phenomena in order to simulate the complex, dynamic processes that are important to consider in urban planning.

Over the past several years, the team has been developing a digital twin of Herrenberg, a small city just outside of Stuttgart. The Herrenberg study has already provided valuable information for city planners and government officials in the state of Baden-Württemberg, and paves the way for improving the model to include additional kinds of data. The team published a detailed report describing its methods and results in the journal Sustainability.

Digital twins are essentially hyper-realistic computer models of complex objects that are capable of simulating their function at a high level of detail. In the past, scientists and engineers have used HPC to create digital twins of many kinds of objects, including buildings, engines, and utility networks. Dembski and his colleagues are among the first to apply this concept to the modeling of entire urban environments.

Their approach begins with the idea that life in a city is the result of complex interactions among many factors. With the availability of new sensors and other digital tools for producing high-quality data, researchers can now collect large datasets representing air quality, traffic flow, and the prevalence of pedestrian traffic, among other dimensions of urban life. By merging these large datasets using supercomputers and visualizing them in virtual reality, it becomes easier to understand their complex interactions — for example, to see how a change in traffic patterns or a new building could affect air quality.

To create such a complex, multidimensional model, the researchers must first develop a basic foundation that can then be expounded upon with more detailed datasets. In building the digital twin of Herrenberg, the team began by using a concept called space syntax. Just as the human skeleton provides a scaffolding for all of the other systems and functions of the human body, space syntax produces a 2D outline of physical grids in a city, offering a framework for performing spatial analysis, such as predicting the likely paths that car or pedestrian traffic might take to move from one point to another.

The team then folds in geographic information system (GIS) data and traffic control systems data in order to incorporate topography, road geometry, and realistic traffic flows in more detail, adding another layer of complexity. Using the open-source fluid dynamics code OpenFOAM–more often used for modeling fuel injector sprays or airplane aerodynamics, for example–they can also create realistic models of the movement of wind and emissions through the city.

In addition to this kind of high-precision physical modeling, the HLRS team also developed an app inviting Herrenberg residents to submit their emotional responses to different areas in the city. Residents provided qualitative data about whether certain locations feel comfortable, unsafe, or ugly, for example. As Dembski explained, “Emotions like joy and fear, the aesthetic experience of green space and architecture, and other emotion-driven factors play a major role in the success of urban design, but are very difficult to represent in architectural models or simulations. Our approach is an early attempt to gather and incorporate these complicated datasets.”

Using a Faro 3D laser scanner, the team also created a 3D visualization of the Herrenberg city centre. The team could then integrate visualizations of its various data sets into an immersive virtual reality model, enabling decision makers to see abstract data “come to life.” For Dembski and the team, this element moves the work one step closer to visualizing a city in a more realistic way.

High-performance computing resources are necessary for this work because of the large datasets involved. Dembski explained, “In a world in which even singular objects such as buildings are already so complex, simulations with supercomputers can provide great support in the design process–just think of wind flow simulation or building physics simulations. If you then consider entire cities and regions in all their complexity and want to understand parts of them, HPC can provide enormous support.”

At the same time, Dembski also noted that the integration of tools, expertise, and the convergence of disparate skill sets and technologies also make HPC centres essential for this work. “It isn’t just about supercomputers and infrastructures,” he said. “It is about the variety of computational resources we have at our disposal, and perhaps most importantly, the interdisciplinary, collaborative environment that makes this work successful.”

“Cities are not one-dimensional, so it does not make sense to design them on a piece of paper,” Dembski said. “The third dimension helps us understand cities and their spatiality. Especially in the context of conventional urban planning and development, the “vista,” or the perception of space at the human scale, is often forgotten. Many people cannot imagine abstract planning at the scale of 1:1,000 or 1:10,000. This also applies to planners, as they often lack the necessary sensitivity for the human scale, which is why we know many urban development projects don’t work. By allowing decision makers to experience an immersive vista in VR, we are helping them experience it more realistically, ultimately helping them better assess and evaluate designs, plans, or other scenarios.”

The team shared its digital twin with Herrenberg city officials and has presented its model at several public events there to encourage public participation in city planning. The response thus far has been very positive.

“When we demonstrated a mobile 3D version of our digital twin using a rear-projection VR environment, it was very well received by the public,” Dembski commented. “It was exciting to see groups taking part in a discussion about city planning who would be difficult or impossible to attract in any other format. There is also great interest in the opportunities that digital twins could open up among planners and decision-makers.”

Currently, HLRS is working with a small group of partners in the context of the International Building Exhibition Stuttgart (IBA’27), a major upcoming architectural event. The collaboration will focus on opportunities offered by digital technologies for city planning processes.

In the near future, the team will also be exploring how artificial intelligence (AI) applications could be used to better represent the myriad factors affecting how residents emotionally experience their home cities.

“We would like to start including larger-scale, more dynamic phenomena in our model,” Dembski said. “This could include factors like regional migration, the effects of gentrification, and the growth, shrinkage, settlement patterns, and overall social and economic resilience of cities. Considering the complex data sets needed to quantify such activities we will need even more computational support, and we think that artificial intelligence applications could also help.”

Although Dembski is excited about the opportunities that digital twins offer for city planning, he acknowledges that even with the arrival of more powerful computing systems there will always be limitations in using computers to fully understand such a complex, “living” structure as a city. “What brings individual people joy? How do unplanned things enrich a built environment?” he asks. “Digital tools can help us envision a more equitable and complete way to design cities of the future, but the human factor is irreplaceable.”