Micro-robotic manipulators with the ability to move in increments far smaller than the width of a human hair might be enlisted for a range of applications in research, manufacturing, medicine and homeland security.

However, a critical obstacle must first be solved: Researchers don’t yet fully understand how to best operate the micro-manipulator bots because of various forces unique to the micro- and nano-scale. 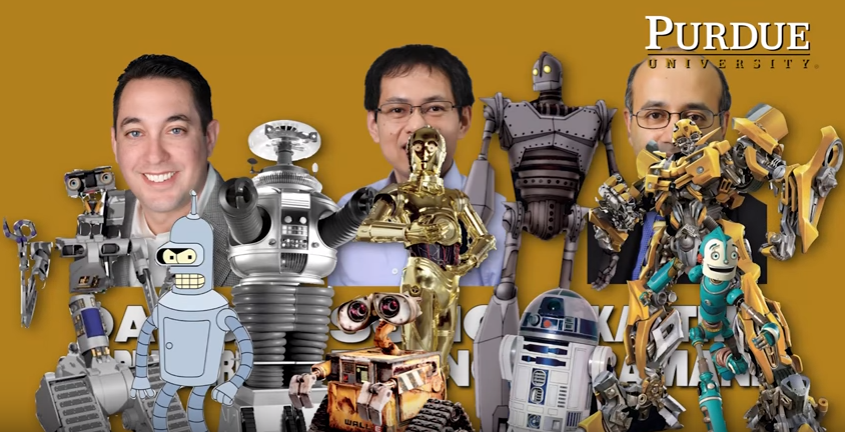 “With an ordinary robot, say you want to pick up a part and move it somewhere,” said David Cappelleri, an assistant professor of mechanical engineering at Purdue University. “We understand the physics behind the manipulation of these kinds of robots, and we have a lot of simulation tools and control methodologies to help plan these motions, execute and control them. We are interested in trying to do similar things at the micro scale, but the problem is that the physics at that scale is not really well understood.”

Factors including van der Waals’ forces, electrostatic and surface tension forces cause “stiction” between tiny components that affect their operation.

“You have stiction – adhesion forces – so it makes everything very unpredictable,” said Cappelleri, director of Purdue’s Multi-Scale Robotics & Automation Lab.

He leads a new project that strives to overcome this key obstacle, working with Purdue researchers and co-principal investigators Karthik Ramani, the Donald W. Feddersen Professor of Mechanical Engineering, and Song Zhang, an associate professor of mechanical engineering. The research is funded with a three-year, $1 million grant from the National Science Foundation.

The project could make possible new “motion planners”, which can be likened to roadmaps, and specialized surfaces that contain nanometer-scale features on which to operate the micro-robots.

“At the macro-scale you know your car is going to drive forward when you step on the accelerator, you know it’s going to go left and right when you turn the steering wheel,” Cappelleri said. “At the micro-scale, when we want to manipulate something to go forward it may go to the left or it may go to the right. We don’t know because of the uncertainty in the system. So one of the goals of this project is to try to reduce that uncertainty.”

The researchers will work to develop a new type of “vision-based force sensor” that uses cameras to precisely measure the motion of robot components. Learning how much a robot’s components deform reveals the forces being applied, which is critical for the proper design of micro-robotic system. Zhang will lead work to create a high-resolution 3-D perception system capable of zooming in on specific structures as they move and deform, allowing for highly accurate force calculations.

Ramani will lead another critical part of the research, to “micro-teleoperate” robotic manipulators using a remote-control haptic system that provides feedback, allowing the researchers to feel the forces exerted on robotic structures.

“We can feel what the robot feels, so if the force is too high you back off manipulating the part before it breaks,” Cappelleri said.

Resulting data will provide “motion primitives,” or a series of motions needed to carry out specific tasks.

“You might have one primitive to move a part in the X direction, another to move it in the Y direction,” he said.

Determining the primitives could then allow researchers to design automated systems.

Three doctoral students will be involved in the research.

Some of the research will be performed at the Birck Nanotechnology Center in Purdue’s Discovery Park.