Researchers have designed a device that uses light to manipulate its mechanical properties. The device, which was fabricated using a plasmomechanical metamaterial, operates through a unique mechanism that couples its optical and mechanical resonances, enabling it to oscillate indefinitely using energy absorbed from light.

This work demonstrates a metamaterial-based approach to develop an optically-driven mechanical oscillator. The device can potentially be used as a new frequency reference to accurately keep time in GPS, computers, wristwatches and other devices, researchers said. Other potential applications that could be derived from this metamaterial-based platform include high precision sensors and quantum transducers. 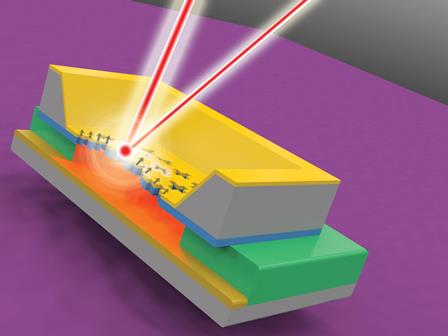 Cross-section of the metamaterial-based device. The top is a bilayer gold/silicon nitride membrane containing an array of cross-shaped nanoantennas etched into the gold layer. The bottom is a metal reflector that is separated from the gold/silicon nitride bilayer by a three-micron-wide air gap. Image courtesy of UC San Diego Nanoengineered Photonics Group

Researchers engineered the metamaterial-based device by integrating tiny light absorbing nanoantennas onto nanomechanical oscillators. The study was led by Ertugrul Cubukcu, a professor of nanoengineering and electrical engineering at the University of California San Diego. The work, which Cubukcu started as a faculty member at the University of Pennsylvania and is continuing at the Jacobs School of Engineering at UC San Diego, demonstrates how efficient light-matter interactions can be utilized for applications in novel nanoscale devices.

Metamaterials are artificial materials that are engineered to exhibit exotic properties not found in nature. For example, metamaterials can be designed to manipulate light, sound and heat waves in ways that can’t typically be done with conventional materials.

Metamaterials are generally considered “lossy” because their metal components absorb light very efficiently. “The lossy trait of metamaterials is considered a nuisance in photonics applications and telecommunications systems, where you have to transmit a lot of power. We’re presenting a unique metamaterials approach by taking advantage of this lossy feature,” Cubukcu said.