A new report from ITU and networking giant, Cisco, identifies the Internet of Things (IoT) as a major global development opportunity that has the potential to improve the lives of millions and dramatically accelerate progress towards the UN Sustainable Development Goals. 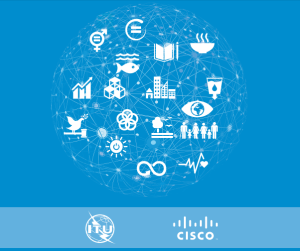 Launched at the Pacific Telecommunications Council annual meeting in Hawaii, “Harnessing the Internet of Things for Global Development” outlines how IoT could have a major impact in areas such as grassroots delivery of health care and education, positively transforming communities within a time frame that would have been unimaginable even a few years ago.

The joint report argues that strong demand for IoT technologies has created a huge array of IoT devices that are readily available, affordable and scalable for developing countries, providing an ideal platform to energize growth in emerging economies and improve people’s quality of life significantly – all with minimal investment.

The IoT concept refers broadly to the growing number of devices – from computers and smartphones to simple sensors and RFID chips – that are connected to the Internet and able to communicate with other devices, often without the need for human intervention. IoT is already extensively deployed in stock and inventory systems, fleet management, environmental monitoring and many industrial processes.

The ITU/Cisco report points to evidence of IoT already having an important impact on health, education and livelihood programmes (such as agricultural productivity) in developing countries. It cites three prime drivers that, if supported, could create an ‘IoT revolution’ in the developing world:

“The Internet of Things is one of the most exciting areas of our fast-evolving ICT industry, offering huge potential for disruption and transformation. In the context of global development challenges, this means we have the potential to surmount long-standing hurdles in basic services like health care, both quickly and affordably. IoT could prove the long-awaited new approach that will help turn-around developing economies and greatly improve millions of people’s day-to-day lives,” said ITU Secretary-General Houlin Zhao.

“The Internet of Things is one of the defining and transformative technologies of our time,” said Dr Robert Pepper, VP Global Technology Policy at Cisco. “The ability to impact millions, if not billions, of lives in the developing world for the better and prevent another digital divide is within our grasp and is an opportunity we can’t afford to miss. Let’s act now to prevent a two-tier world of the connected and the unconnected.”

Interconnectedness will be the key to increased usage, the report stresses. Thanks to the efforts of international standards-makers like ITU, global interoperability between devices is now increasing, making operating and synchronizing a variety of formerly incompatible devices both possible and practical. To accelerate global collaboration on IoT development, last year ITU’s Telecommunication Standardization Sector set up a new ITU-T Study Group, Study Group 20: IoT and its applications, including smart cities and communities, to address the standardization requirements of IoT, with an initial focus on IoT applications in smart cities.*

Machine-to-machine (M2M) information flows across networks will soon greatly outstrip human-generated digital information. ITU’s flagship regulatory report Trends in Telecommunication Reform 2015 identified M2M communications over mobile cellular networks as the fastest-growing ICT service in terms of traffic. ITU estimates that over one billion wireless IoT devices were shipped in 2015, up 60 per cent from 2014 to reach a predicted installed base of 2.8 billion. As many as 25 billion networked devices are predicted to be connected by 2020, with market revenues for IoT expected to grow to USD 1.7 trillion by 2019, making IoT the largest device market worldwide.

Among a shortlist of recommendations that includes government support for tech start-ups, ICT incubators and local data centres, the report urges developing world governments and businesses to seize the IoT opportunity and develop the policies and regulatory frameworks that will create an enabling environment for IoT deployment. IoT will be a featured topic at ITU’s forthcoming Global Symposium for Regulators, the world’s largest global gathering of the ICT regulatory community, which will be held at Sharm el-Sheikh, Egypt, from 11-14 May, 2016.