Next-generation steel and metal alloys are a step closer to reality, thanks to an international research project involving a University of Queensland scientist. 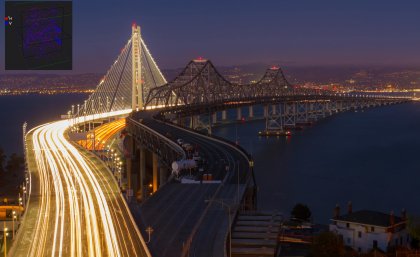 The old and the new bridge, as seen at night from Yerba Buena Island to Oakland (mid-September 2013). Photo credit Frank Schulenburg.

The work could overcome the problem of hydrogen alloy embrittlement that has led to catastrophic failures in major engineering and building projects.

UQ Centre for Microscopy and Microanalysis Director Professor Roger Wepf said the problem had been recognised for almost 140 years.

“The current generation of these metals can suffer hydrogen embrittlement, where they become brittle and fracture due to the accidental introduction of hydrogen during manufacture and processing,” he said.

“A major example of alloy embrittlement occurred in 2013, when bolts in the eastern span of the San Francisco-Oakland bridge failed tests during construction.”

“Our research collaboration has, for the first time, localised and visualised hydrogen in steels and alloys,” he said.

“This is essential for the development of new alloys with greater endurance.”

“We have shown that it’s possible to localise hydrogen at atomic resolution – at the scale of a single atom – or at a nanometre (less than one-billionth of a metre) scale by combining different technologies in a closed and protected workflow.

The research, published in Science, involved scientists from the Oxford and Sheffield universities in the UK and ETH Zurich in Switzerland.

The UQ Centre for Microscopy and Microanalysis will present two Microscopy and Myscope outreach sessions at the World Science Festival Brisbane on March 25 and March 26.  Details at https://world-science-festival.event.uq.edu.au/

Source: The University of Queensland