Fraunhofer researchers have developed an energy-saving display that reduces the power consumption to a fraction.

Via a small display, data glasses present the eye with information or images which are received using a radio link from the frame of the glasses. The big advantage: With the data glasses, the wearer’s hands are free – in contrast, a smartphone has to be held in the hand. This may be interesting for mechanics. They can look at assembly instructions and construction plans via the data glasses while keeping their hands on the tools. Data glasses are becoming increasingly attractive for athletes, as well. Mountain bikers, for example, can follow the projected navigation arrows as they travel cross country. The cyclists can keep their hands on their handlebars, while the smartphone with the GPS remains in the pocket. Despite such benefits, data glasses have not really made a breakthrough yet. The problem: The displays use up a lot of battery power because the video images process lots of data. In most cases, the battery is out of juice after an hour. What’s more, the microprocessors get hot very quickly. The frame of the glasses warms up, which is unpleasant on the sensitive area around the temple. 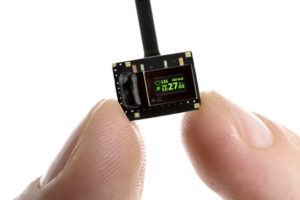 © Photo Fraunhofer FEP Fraunhofer researchers have developed an energy-saving display that reduces the power consumption to a fraction.

Engineers from the Fraunhofer Institute for Organic Electronics, Electron Beam and Plasma Technology FEP in Dresden have developed a particularly energy-saving display that is also very bright. The scientists have many years of experience in the design and manufacture of displays with organic light emitting diodes (OLED). These are based on electrically conducting organic semiconductors that emit very bright light while energized. The OLEDs are applied to a silicon semiconductor which controls the individual pixels. The FEP has integrated a camera function into the chip. As a result, the OLED microdisplays not only emit light, but also perceive the surroundings. There is also a small light-sensitive photodiode located in each pixel. The camera function, for example, is important in order to determine the direction in which the wearer looks. However, these displays have the same problem as all other displays of data glasses – high energy consumption.

In order to avoid the flickering of a moving video image, many successive images have to be played in one second, like with a flipbook – in the case of the video display, this amounts to 60 images. The control electronics and the chip therefore have to process large amounts of data in a split second. That eats up a lot of electricity. Moreover, the chip and the control electronics heat up. Project manager Philipp Wartenberg and his colleagues at the FEP have found a way to reduce the large data stream. “We now control the chip so that the entire video image is not constantly renewed, rather only that part of the display in which something changes.” For example, if an actor runs through a room in a movie, only his position changes, not the background. In applications such as a navigation system for cyclists, in which only arrows or metre information is displayed, it is unnecessary in any case to constantly renew the whole picture, says Wartenberg. “To put it simply, we have now adapted the circuit so that it only lets through that portion of the data stream which changes.”

Meanwhile, there is a prototype that the experts are now presenting at the electronica trade fair in Munich. The energy savings are considerable: While ordinary data glasses require an output of 200 milliwatts, the FEP display suffices with two to three milliwatts – a mere one hundredth of the original amount. Nevertheless, it is still bright, thanks to the OLED technology. In order to reduce the video data stream, Wartenberg and his colleagues first had to redesign the chip and the control electronics in large parts. The pixels of today’s displays, which are designed for rapid, repeated imaging, normally stop lighting up after a short time. In a model that does not constantly update the entire screen, that cannot be, because the still areas of the display quickly appear black otherwise. The development by the FEP controls the pixels so that they continue to light.

Wartenberg can imagine the display being interesting not only for industry, but also for private clients and athletes in the future. Joggers could use it to constantly check their heart rate and would no longer have to look at the jiggling smartphone display. The scientists are ready for projects in order to bring the display to the market soon.