Empa researchers think so. In their experiments, they fed a new self-learning heat­ing control system with temperature data from the previous year and the current weather forecast. The “smart” control system was then able to assess the building’s behavior and act with good anticipation. The result: greater comfort, lower energy costs.

Factory halls, airport terminals and high-rise office buildings are often equipped with automated “anticipatory” heating systems. These work with pre-defined scenarios specially calculated for the building and help save building own­ers a great deal of heating energy. However, such an individual programming is too expensive for individual apartments and private homes. 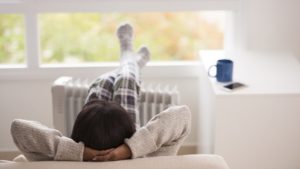 Conventional thermostats only switch on when it gets cooler. The intelligent controller can heat with foresight and thus saves energy. Image: iStock

Last summer, a group of Empa re­searchers proved for the first time that it could indeed be much simpler than that: Intelligent heating and cooling control does not necessarily have to be programmed, the system can just as easily learn to reduce costs by itself and based on the data of past weeks and months. Programming experts are no longer necessary. With this trick, the cost-saving technology will soon also be available for families and singles.

The crucial experiment took place in Empa’s research building NEST. The UMAR unit (“Urban Mining and Recycling”) offers prime conditions for this test: A large eat-in kitchen is framed on both sides by two student rooms. Both rooms are 18 square meters each. The entire window front looks east-southeast towards the morning sun. In the UMAR unit, heated or pre-­cooled water flows through a stainless steel ceiling cladding and ensures the desired room temperature. The energy used for heating and cooling can be calculated for each individual room using the respective valve positions.

Clever cooling – thanks to the weather forecast

Since project leader Felix Bünning and his colleague Benjamin Huber did not want to wait for the heating period, they started a cooling experiment in June 2019. The week from 20 to 26 June began with two sunny, but still rather cool days, followed by a cloudy day, finally the sun burned over Dübendorf and drove the outside temper­ature to just short of 40 degrees.

In the two sleeping rooms, the temperature should not exceed the mark of 25 degrees during the day, at night the limit is set to 23 degrees. A conventional thermostatic valve provided the cooling in one room. In the other room, the experimental control system equipped with artificial intelligence (AI) developed by Bünning and Huber and their team was at work. The AI had been fed with data from the past ten months – and it knew the current weather forecast from MeteoSwiss.

The result was crystal-clear: The smart heating and cooling control system adhered much more closely to the pre-set comfort specifications – while using around 25% less energy. This was mainly because in the morning, when the sun was shining through the windows, the system was cooling the rooms beforehand. The conventional thermostat in the second room, on the other hand, could only react once the temperature went through the ceiling. Too late, too hectic and with full power. In November 2019, a cool month with little sun, lots of rain and cool winds, Bünning and Huber repeated the experiment. Now it was all about heating the two rooms. At the time this issue went to press, the evaluation was still in progress. But Bünning is convinced that his predictive heating control system also collects points here.

The Empa team has already prepared the next step: “In order to test the system in a real-world environment, we have planned a larger field test in a building with 60 apartments. We will equip four of these apartments with our intelligent heating and cooling control system”.Bünning is curious about the results. “I think that new controllers based on machine learning offer a huge opportunity. With this method we can construct a good, energy-saving retrofit solution for existing heating systems using relatively simple means and the recorded data.”