In the last 15 years, the internet has redefined the output of traditional broadcast media — television and radio — as well as print media, such as magazines and newspapers. It offers a number of new or extended services, particularly in marketing and advertising. However, while around three-quarters of enterprises located in the European Union (EU) and employing at least 10 persons had a website in 2016 and almost half used social media, just a quarter (25%) used internet advertising.

This information on paid internet advertising comes from an article issued by Eurostat, the statistical office of the European Union, and forms part of the results of a survey conducted at the beginning of 2016 on ICT (Information and Communication Technologies) usage and e-commerce in enterprises. 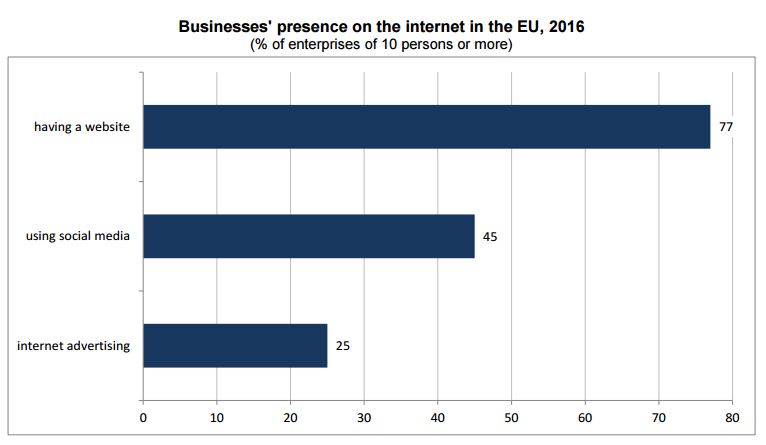 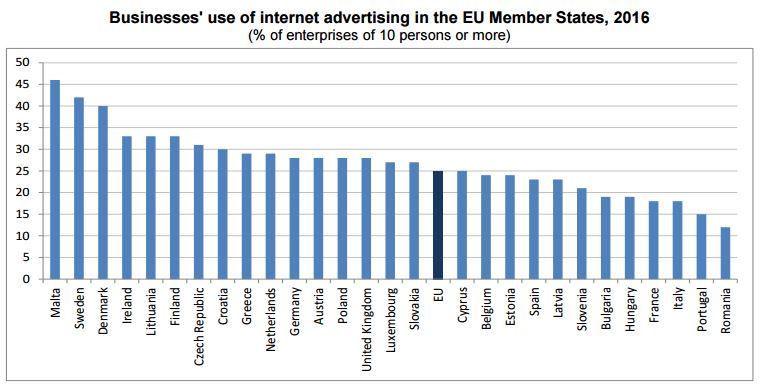 In every EU Member State, contextual advertising, i.e. the use of information from the content of internet surfers’ visited webpages or keywords from their queries to identify the audience accurately before sending relevant ads, was by far the main type of targeted online advertising used by enterprises. The highest proportions of enterprises using contextual advertising for their internet campaigns were recorded in the Czech Republic and Poland (both 89%), ahead of Romania (84%), Greece, Latvia and the Netherlands (all 83%), Germany, France and Slovenia (all 82%), Lithuania and Finland (both 81%) as well as Hungary (80%). 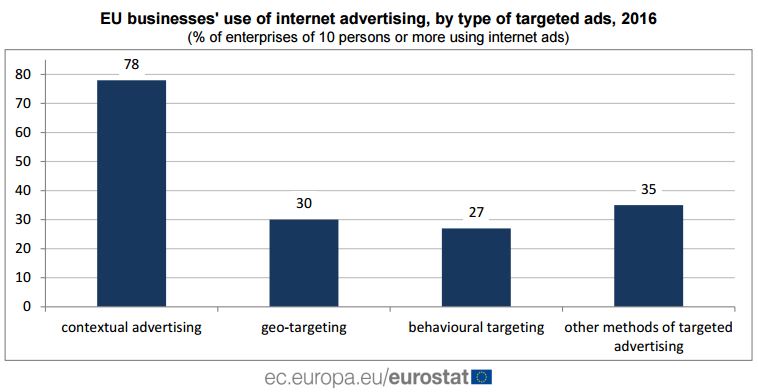 Data presented in this News Release are based on the results of the 2016 European Union survey on “ICT usage and ecommerce in enterprises”. This survey covered enterprises with at least 10 persons employed in manufacturing; electricity, gas and steam; water supply; construction; wholesale and retail trade, repair of motor vehicles and motorcycles; transportation and storage; accommodation and food service activities; information and communication; real estate; professional, scientific and technical activities; administrative and support activities; repair of computers and communication equipment.

Targeted internet advertising focuses on using internet-based technologies that increase the likelihood of promotional marketing messages reaching the right audience. Targeted internet advertising includes dynamic ads using various methods such as online contextual advertising, behavioural targeting and geo-targeting as well as the use of static ads on subjectspecific websites (e.g. displaying ads for spare parts of car engines on websites on vehicles or automotive themes) or websites such as online newspapers, magazines or blogs for specific audience.

Behavioural targeting is a form of targeted internet advertising, based on information about users’ past browsing activities recorded by cookies. Businesses may use this information to determine whether an internet user belongs to a specific target audience, subsequently sending internet ads matching the user’s profile.

Geo-targeting is a type of targeted internet advertising that refers to the use of internet users’ geographic location such as the country, region, city and often zip code that provide useful information for targeting suitable advertisements, for example about restaurants nearby.

Other methods of targeted advertising concern the use of static internet ads on subject-specific websites (e.g. displaying ads for spare parts of car engines on websites on vehicles or automotive themes) or on websites such as online newspapers, magazines or blogs for specific audience.