Did you know that even advanced gasoline engines waste roughly a fifth of their fuel? Especially at high engine speeds, some of the gasoline is used for cooling instead of for propulsion. With its new water injection, Bosch shows that it does not have to be that way. Particularly when accelerating quickly or driving on the freeway, the injection of additional water makes it possible to reduce fuel consumption by up to 13 percent. “With our water injection, we show that the combustion engine still has some tricks up its sleeve,” says Dr. Rolf Bulander, chairman of the Bosch Mobility Solutions business sector and member of the board of management of Robert Bosch GmbH. The fuel economy offered by this Bosch technology comes especially to the fore in three- and four-cylinder downsized engines: in other words, in precisely the kind of engines to be found under the hood of any average midsize car. 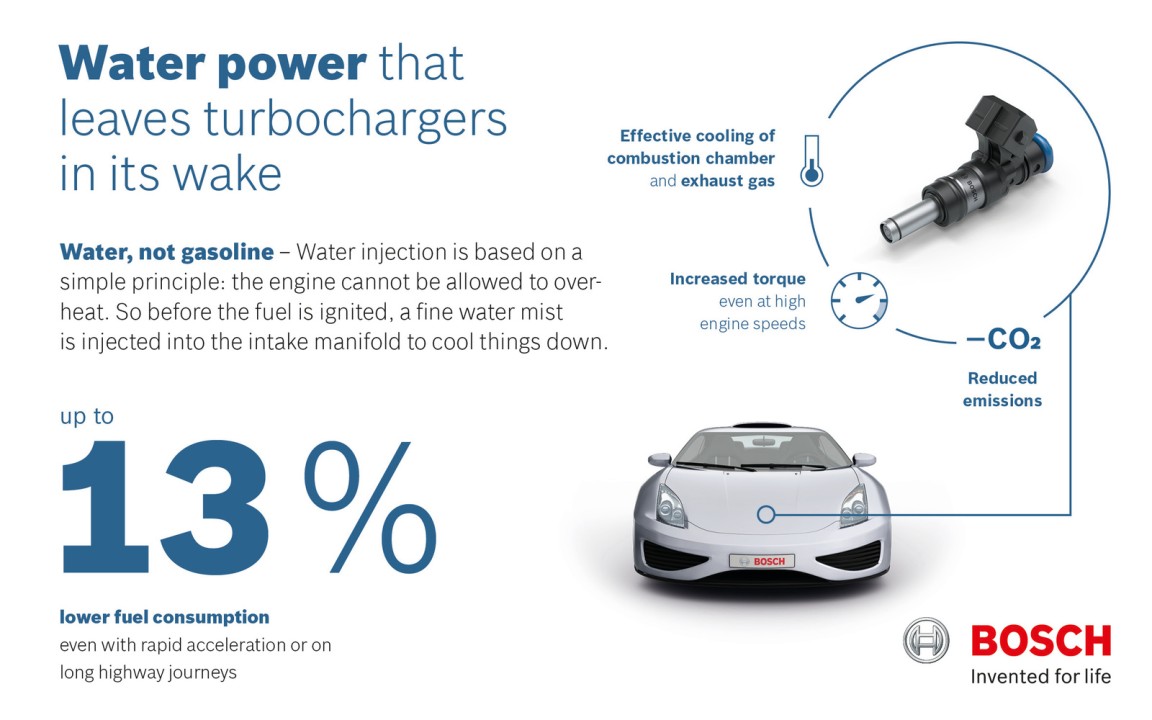 Extra boost for the turbocharged engine

But it is not only in the area of fuel economy that the Bosch innovation comes into play. It can make cars more powerful as well. “Water injection can deliver an extra kick in any turbocharged engine,” says Stefan Seiberth, president of the Gasoline Systems division at Bosch. Earlier ignition angles mean that the engine is operated even more efficiently. On this basis, engineers can coax additional power out of the engine, even in powerful sports cars.

The basis of this innovative engine technology is a simple fact: an engine must not be allowed to overheat. To stop this happening, additional fuel is injected into nearly every gasoline engine on today’s roads. This fuel evaporates, cooling parts of the engine block. With water injection, Bosch engineers have exploited this physical principle. Before the fuel ignites, a fine mist of water is injected into the intake duct. Water’s high heat of vaporization means that it provides effective cooling.

This is also the reason only a small additional volume of water is needed: for every one hundred kilometers driven, only a few hundred milliliters are necessary. As a result, the compact water tank that supplies the injection system with distilled water only has to be refilled every few thousand kilometers at the most.

And if the tank should run empty, there is nothing to worry about: the engine will still run smoothly – albeit without the higher torque and lower consumption provided by water injection.

Is this technology already in production?

The BMW M4 GTS is the first production vehicle to feature an innovative and groundbreaking water injection system. In the vehicle’s turbocharged six-cylinder engine, it offers improved performance and consumption even at full load. Bosch supplies water injection parts for the BMW M4 GTS.

How high is fuel consumption in the driving cycle?

In the future consumption test (WLTC), water injection makes it possible to save up to 4 percent fuel. In real driving conditions, even more is possible: here, fuel consumption can be reduced by up to 13 percent when accelerating quickly or driving on the freeway.

Doesn’t water injection cause the engine to rust?

No. No water is left in the combustion chamber. The water evaporates before combustion happens in the engine. All the water is expelled into the environment, together with the exhaust. How is water refilled? Water injection only requires a small amount of water to be kept on board. On average, it only has to be refilled every 3,000 kilometers. The separate water tank has to be filled with distilled water.

Can the water in the tank freeze?

When the engine is stopped, the water flows back into its tank, where it may freeze. Following engine restart, the water thaws again. Is there such a thing as direct water injection? Bosch uses a port injection system, since it has clear technical advantages and costs less. This makes water injection suitable for large-scale production, as well as for many vehicle segments.