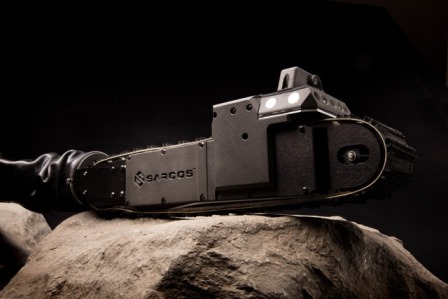 “The Guardian S represents a quantum leap forward in inspection tools that create safer work environments and, ultimately, prevent injuries and save lives,” said Ben Wolff, Sarcos Chairman and CEO. “We recognize that drones and UAVs are doing an incredible job of collecting useful data about wide-open environments, but we see an opportunity for collecting data in confined or enclosed spaces, or circumstances that require hours, not minutes, of data collection, or where data can only be collected by placing sensors in close proximity to, or in contact with, a surface. We designed the Guardian S to address these challenges. The Guardian S is the first multi-purpose, man-portable, wirelessly-controlled, unmanned ground vehicle, capable of traversing challenging terrain, climbing vertically and even inverted, that acts as a mobile IoT platform to carry multiple sensor payloads.”

Purpose-Built System to Augment Humans, Not Replace Them

The Guardian S offers optional cloud-connectivity through the Microsoft Azure cloud computing platform and the Microsoft Azure IoT Suite, enabling secure storage and retrieval of environmental video, audio, and sensor data, in addition to information on the health and operation of the robot. The combination of IoT sensors and Azure services has proven to be highly valuable for evaluating the performance of, and predicting required maintenance for the various industrial machines in which they are placed. The Guardian S mobile IoT platform takes the utility of the cloud to the next level by leveraging Azure cloud computing functionality and analytics to collect and analyze data about the environment surrounding the robot for enhanced mission awareness and success.

“Microsoft is thrilled to work with Sarcos—a global leader in the development of dexterous robots for unstructured and unpredictable environments—on the commercialization of the Guardian S,” said Caglayan Arkan, General Manager of Worldwide Manufacturing at Microsoft. “They have created robots no one ever thought were possible with the mission of saving lives, preventing injury, and enhancing efficiency. The Guardian S integrates our Microsoft Azure cloud computing platform, Azure IoT Suite, and Windows 10 for the controller, making it one of the first truly mobile IoT robotic platforms available today—raising the bar for traditional ground robots.”

Major Advancements in the Global Industrial and Public Safety Markets

Optimized for unstructured and unpredictable environments, the Guardian S provides real-time information and data to the human operator while keeping them out of harm’s way. It is uniquely designed to go where other robots can’t, and humans shouldn’t, including confined spaces and hard-to-reach structures. The Guardian S can add significant value to a variety of different industries, including public safety (SWAT, explosive ordinance disposal, HAZMAT, fire, disaster recovery), mining, oil & gas, infrastructure inspections, maritime, power generation, aircraft, and more.

The Guardian S can be purchased through Sarcos’ Robot-as-a-Service (RaaS) offering, or through a single upfront payment. For more information, visit http://www.sarcos.com/

Sarcos® is a leader in dexterous, tele-operated robotic systems designed for use in unpredictable and unstructured environments. Leveraging more than 20 years of research and development, Sarcos provides revolutionary robotics systems that enhance human productivity, making people stronger, safer and getting them access to places they couldn’t otherwise go. Sarcos’ investors include Microsoft, GE Ventures, Caterpillar, and Schlumberger. Sarcos is headquartered in Salt Lake City, Utah with additional offices in the greater Seattle area.