Every year, hundreds of thousands of scientists spend tens of billions of dollars to organize and attend conferences. 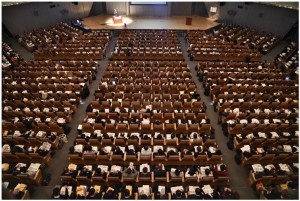 The answer is yes, according to a new Northwestern University study. Scientists who interact with others during assigned sessions at conferences are more likely to form productive collaborations than scientists who do not, researchers found. And the kicker? It doesn’t matter whether the conference is in person or virtual.

“Scientific conferences are a very expensive industry,” said Northwestern’s Emma Zajdela, the study’s first author. “People often talk about whether or not we should rethink conferences. Our results suggest that the way organizers design conferences can have a direct effect on which scientific collaborations are formed and, by extension, on the direction of scientific inquiry.”

The study was published this week (Oct. 4) in the journal Physical Review Research.

A National Science Foundation Graduate Research Fellow, Zajdela is a Ph.D. candidate in Northwestern’s McCormick School of Engineering. Daniel Abrams, a professor of engineering sciences and applied mathematics at McCormick, is the paper’s senior author and Zajdela’s adviser.

To conduct the study, Zajdela, Abrams and their collaborators developed a new mathematical model to understand and predict how scientists form collaborations at both in-person and virtual conferences. Then, they validated the model with extensive data from Scialogs, a series of scientific conferences organized by the Research Corporation for Science Advancement, aimed at promoting research, dialog and community.

The team found that interactions in assigned conference sessions — at both in-person and virtual conferences — were a significant predictor of future collaborations.

“Today, science is conducted by teams, so the formation of new teams is especially important,” Zajdela said. “Science isn’t done by individuals anymore. It’s more interdisciplinary and multi-institutional. We need these conferences because scientists can meet other researchers who they might never have met otherwise.”

Initially, Zajdela and Abrams tracked patterns of interactions among hundreds of scientists during 12 multiday, in-person Scialog conferences over the span of five years, including room-level participation data. But when the COVID-19 pandemic hit, most conferences, including Scialogs, shifted to a virtual format.

“From a scientific perspective, this provided us with a rare natural experiment and the ability to make a direct comparison between virtual and in-person conferences,” Zajdela said. “Before doing this study, we hypothesized that virtual conferences would be less effective at forming new collaborations among scientists. Instead, what we found was surprising.”

“We interpret these results as coming from the fact that scientists did not have the same opportunities for informal interaction (during breaks or meals) in the virtual conferences as they did in the in-person conferences,” Zajdela said. “Therefore, the sessions they were assigned to were the only place that they could meet people to form teams with; hence the greater importance of interaction in these sessions for team formation.”