Physicists at the U.S. Department of Energy’s Ames Laboratory have discovered a topological metal, PtSn4 (platinum and tin), with a unique electronic structure that may someday lead to energy efficient computers with increased processor speeds and data storage.

The electrons in topological quantum materials can travel close to speed of light thanks to unique property called Dirac dispersion. Up until now, only isolated points, called Dirac points, with relatively small numbers of conduction electrons, were known to exist in such materials. In PtSn4, the scientists not only discovered a high density of conduction electrons, but also large number of closely positioned Dirac points forming extended lines or Dirac node arcs. 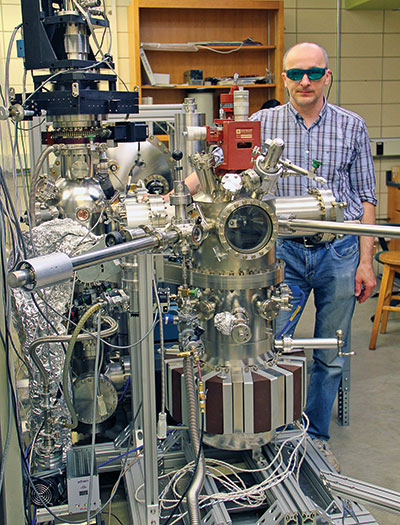 Kaminski and his ARPES equipment.

“This type of electron transport is very special,” said Adam Kaminski, Ames Laboratory scientist and professor at Iowa State University’s Department of Physics and Astronomy. “Our research has been able to associate the extreme magnetoresistance with novel features in their electronic structure, which may lead to future improvements in computer speed, efficiency and data storage.”

The discovery was made using a laser-based angle-resolved photoemission spectroscopy (ARPES) instrument, which was developed at Ames Laboratory by Kaminski, and the measurement provides high-resolution details of the electronic properties of materials.

“Laser ARPES has given us unprecedented tunability and resolution for visualizing these remarkable properties in laboratory environments,” said Paul Canfield, Ames Laboratory scientist and Distinguished Professor of Physics and Astronomy at Iowa State University. “Combining it with Ames Laboratory’s computational modeling abilities and our 80-year reputation in designing and growing new materials has led to our success in this discovery.”

The research was supported by the U.S. Department of Energy Office of Science.