89 420 applications for trade mark protection were received in 2015 by the EU Intellectual Property Office (EUIPO) from the Member States of the European Union (EU), a number about 4 times higher that of the mid-1990s. Over recent years, the number of EU trade mark (TM) applications originating from EU Member States has constantly risen, with the exception of the slowdown registered with the economic and financial crisis in 2008.

This information is issued by Eurostat, the statistical office of the European Union, on the occasion of the World Intellectual Property Day, celebrated every 26 April to promote discussion of the role of intellectual property in encouraging innovation and creativity. Data on TM applications presented in this news release only represent a small selection of a wider range of indicators related to intellectual property rights available at Eurostat, which also include data on patent and industrial design.

Highest number of TM applications per inhabitant in Luxembourg, lowest in Romania

In relative terms, the highest number of TM applications per million inhabitants was recorded in 2015 by Luxembourg (2 190), followed at a distance by Malta (960), Cyprus (652), Austria (345) and Denmark (309). At the opposite end of the scale, Croatia (32), Romania (33), Hungary (57), Slovakia (67) and Greece (72) registered the lowest shares of TM applications relative to the size of their respective populations. In the EU, there were on average 176 applications for trade mark protection per million inhabitants made to the EUIPO in 2015.

When analyzing these data, it should be noted that corporations, which are the main source of trade mark applications, might benefit from the fiscal policies of certain countries with low corporate tax rates, including tax exemptions for intellectual property rights protection.

Among the 20 regions in the EU with the highest number of TM applications made to the EUIPO in 2014, four were in Spain, three in Germany, two each in France, Italy and the United Kingdom and one each in Ireland, the Netherlands, Austria, Poland, Finland and Sweden, as well as Luxembourg.

It should be noted that EU trade mark protection activity is mainly concentrated in the capital regions, with more than half out of the 20 EU regions with the highest number of TM applications to the EUIPO in 2014 being capital regions. 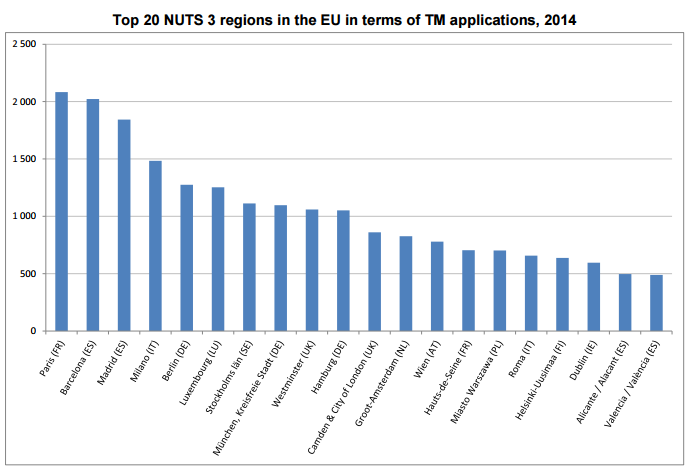 The statistics presented in this News Release are based on raw data received from the European Union Intellectual Property Office (EUIPO), the EU’s agency responsible for managing the EU trade mark and the registered Community design.

An EU trade mark is an exclusive right that protects distinctive signs, valid across the EU, registered directly with EUIPO in accordance with the conditions specified in the trade mark regulations.

Trade marks constitute means by which creators seek protection for their industrial property. Trade marks reflect the nontechnological innovation in every sector of economic life, including services. In this context, indicators based on Trade mark data can provide a link between innovation and the market. Trade marks such as words or figurative marks are an essential part of the “identity” of goods and services. They help deliver brand recognition, in logos for example, and play an important role in marketing and communication. It is possible to register a variety of trade marks including words, other graphical representations, and even sounds. Rights owners have a choice of obtaining protection on a country-by-country basis, or using international systems.

For the calculation of totals for EU trade marks, full counts are applied. Fractional counting is not applied because although an application can be assigned to one or more owners, the first owner of the application is taken into account for the assignment of the geographical origin of the application.

Regional data are based on the Nomenclature of Territorial Units for Statistics (NUTS) 2010, which provide a uniform, consistent breakdown of territorial units for the production of regional statistics for the EU.