Aerial 3D Display is the one and only one technology that enables to draw the true 3D image as well as 3D model animations in the mid air by creating arrays of selfluminous dots, which is the entirely innovative approach and does not require any gimmick such as fog or screen needed in other holographic display. The main usage will be in emergency sign self auto-drive and digital signage. 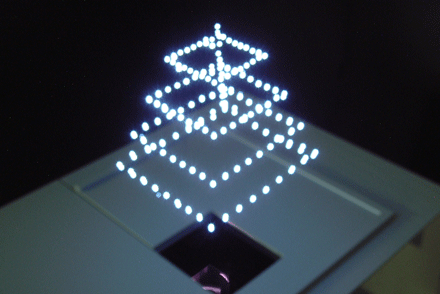 Most of the 3D displays reported until now draw pseudo-3D images on 2D planes by utilizing the human binocular disparity. However, many problems occur, e.g., the limitation of the visual field, and the physiological displeasure due to the misidentification of virtual images.

To overcome the mentioned problems, was done research studies to succeed in developing “True 3D Display” which can produce bright dot in the air so audience can see 3D images in true 3D space.

The Aerial 3D display device uses the plasma emission phenomenon near the focal point of focused laser light. By controlling the position of the focal point in the x, y, and z axes, it displays real 3D images constructed by dot arrays in the air.