Researchers at the Department of Energy’s Oak Ridge National Laboratory have combined advanced in-situ microscopy and theoretical calculations to uncover important clues to the properties of a promising next-generation energy storage material for supercapacitors and batteries.

ORNL’s Fluid Interface Reactions, Structures and Transport (FIRST) research team, using scanning probe microscopy made available through the Center for Nanophase Materials Sciences (CNMS) user program, have observed for the first time at the nanoscale and in a liquid environment how ions move and diffuse between layers of a two-dimensional electrode during electrochemical cycling. This migration is critical to understanding how energy is stored in the material, called MXene, and what drives its exceptional energy storage properties.

“We have developed a technique for liquid environments that allows us to track how ions enter the interlayer spaces. There is very little information on how this actually happens,” said Nina Balke, one of a team of researchers working with Drexel University’s Yury Gogotsi in the FIRST Center, a DOE Office of Science Energy Frontier Research Center. 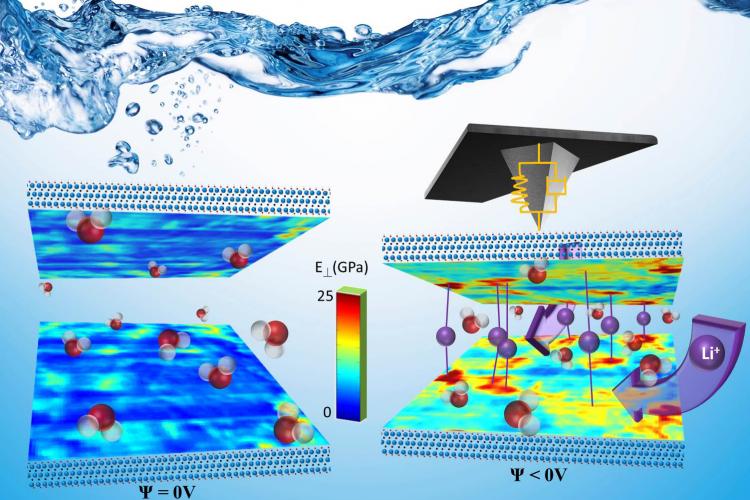 When a negative bias is applied to a two-dimensional MXene electrode, Li+ ions from the electrolyte migrate in the material via specific channels to the reaction sites, where the electron transfer occurs. Scanning probe microscopy at Oak Ridge National Laboratory has provided the first nanoscale, liquid environment analysis of this energy storage material.

“The energy storage properties have been characterized on a microscopic scale, but no one knows what happens in the active material on the nanoscale in terms of ion insertion and how this affects stresses and strains in the material,” Balke said.

The so-called MXene material – which acts as a two-dimensional electrode that could be fabricated with the flexibility of a sheet of paper – is based on MAX-phase ceramics, which have been studied for decades.  Chemical removal of the “A” layer leaves two-dimensional flakes composed of transition metal layers – the “M” – sandwiching carbon or nitrogen layers (the “X”) in the resulting MXene, which physically resembles graphite.

These MXenes, which have exhibited very high capacitance, or ability to store electrical charge, have only recently been explored as an energy storage medium for advanced batteries.

“The interaction and charge transfer of the ion and the MXene layers is very important for its performance as an energy storage medium. The adsorption processes drive interesting phenomena that govern the mechanisms we observed through scanning probe microscopy,” said FIRST researcher Jeremy Come.

That observation laid the groundwork for the scanning probe microscopy-based nanoscale characterization. The researchers measured the local changes in stiffness when ions enter the material. There is a direct correlation with the diffusion pattern of ions and the stiffness of the material.

Come noted that the ions are inserted into the electrode in a solution.

“Therefore, we need to work in liquid environment to drive the ions within the MXene material. Then we can measure the mechanical properties in-situ at different stages of charge storage, which gives us direct insight about where the ions are stored,” he said.

Until this study the technique had not been done in a liquid environment.

The processes behind ion insertion and the ionic interactions in the electrode material had been out of reach at the nanoscale until the CNMS scanning probe microscopy group’s studies. The experiments underscore the need for in-situ analysis to understand the nanoscale elastic changes in the 2D material in both dry and wet environments and the effect of ion storage on the energy storage material over time.

The researchers’ next steps are to improve the ionic diffusion paths in the material and explore different materials from the MXene family. Ultimately, the team hopes to understand the process’s fundamental mechanism and mechanical properties, which would allow tuning the energy storage as well as improving the material’s performance and lifetime.

UT-Battelle manages ORNL for the DOE’s Office of Science. The Office of Science is the single largest supporter of basic research in the physical sciences in the United States, and is working to address some of the most pressing challenges of our time. For more information, please visit http://science.energy.gov/.