In computer aided vehicle engineering, you need accurate data on various environmental influences. This is the only way developers can conduct tests that simulate the experience of a real car. At the Hannover Messe, researchers at the Fraunhofer Institute are presenting a quick and inexpensive system that collects real data at normal driving speeds and processes this data in real time as fine-grained and coarse-grained data for 3D driving simulations. 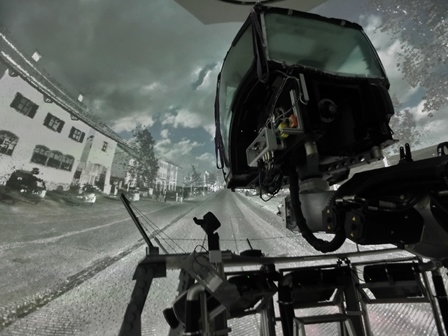 Engineering departments at large automotive companies today use simulation when conducting virtual tests during the development phase of their new vehicle designs. This involves computing the physical properties of the cars in advance, which significantly shortens the often year-long testing loops with real test vehicles. For example, this is already being done in testing passive safety, acoustics, durability and reliability, and for energy efficiency, fuel consumption and carbon emissions. At present, vehicle can be simulated very well using software tools.

However, it is difficult to simulate environmental influences that have a significant effect on the automobile while driving, such as street conditions, weather and driving maneuvers. Experts often work with assumptions rather than with actual data because generating the actual data and making it relevant for simulations is complex and expensive. “For years we have been working closely with automobile and commercial vehicle manufacturers; we have recognized this need and made it our mission to develop cost-effective solutions to include road and environment into simulation based vehicle engineering”, says Dr. Klaus Dressler of the Fraunhofer Institute for Industrial Mathematics ITWM in Kaiserslautern.

At the Hannover Messe 2016, scientists from the Fraunhofer Institute will be presenting a system that consists of a test vehicle, a geo-referenced database and a vehicle simulator (Hall 7, Stand E11). Using two 360-degree laser scanners, the Road & Environmental Data Acquisition Rover (REDAR) captures enormous amounts of environmental data at normal driving speed. “We call it point cloud data. That means for each 3D coordinate we have environmental data,” says Dressler. The ITWM researchers have managed to prepare the terabyte-sized dataset so that it can be used in real time in 3D interactive driving simulations. “The volume of data is so large that the data cannot be easily fed into the memory of a computer system. We have therefore developed an out-of-core method to process only the data necessary for the running time in the simulator.”

REDAR captures data from the building fronts to the left and right and from the street in front and behind of the vehicle at a distance of 200 meters. It also scans the road‘s surface with a resolution of less than half a centimeter. An inertial platform eliminates potential movement of the vehicle from the raw data of the laser scanner so that it can be objectively processed by the software. “To build  such a complex measurement system and consistently process the data through appropriate algorithms were our biggest challenges,” Dressler adds. The test vehicle has been in use since 2015 and has already been collecting data for various customer projects.

ITWM‘s own driving simulator RODOS (Robot-based Driving and Operation Simulator) converts the metrics collected by REDAR. The simulator consists of a cabin system in which a steering wheel, gas and brake pedal can be operated. The driver cabin is connected with a 6-axle robot system that realistically simulates accelerations, braking or driving around tight curves. “The test driver moves through a virtual world that feels very realistic after just a few minutes,“ explains Dressler. The simulations are supported with data from the database system known as Virtual Measurement Campaign (VMC). The database provides the world‘s road network with its topography, regulations, weather and additional geo-referenced data. “With the data collected from the data acquistion vehicle we merge real fine-coarsed data with the coarse-grained data from the VMC. Merging the two worlds is an important step in developing test scenarios for the engineering of road-bound vehicles,” says Dressler.

At the joint stand of the Fraunhofer Society at the Hannover Messe, the researchers will show how REDAR‘s fine-coarsed data is imported into the coarse-grained world of 3D driving simulations.