A touch screen with haptic feedback developed by Bosch was honored with the “CES 2016 Innovation Award” in the “In-Vehicle Audio/ Video” category on November 10, 2015. The special feature of the touch screen: thanks to haptic feedback, users can operate infotainment applications such as navigation, radio, or smartphone functions interactively. The keys displayed on the touch screen have the feel of realistic buttons so that it is often possible for users to find their way around the keyboard without looking while operating the applications. They can keep their eyes on the road for much longer periods, substantially enhancing safety while driving. 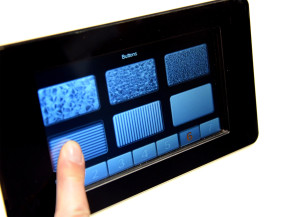 “The new touch screen combines the simple operation of mechanical buttons with the advantages of a touch screen, significantly enhancing ease of operation” says Manfred Baden, President of the Bosch Car Multimedia division. “The innovative technology offers everything that is required to ensure its fast success on the market.” The CES Innovation Awards are sponsored by the Consumer Technology Association (CTA)TM and recognize the best products at the CES in advance of the show every year. Bosch was previously the recipient of the Best-of-CES Award for the Chevrolet MyLink system in the category “Car Tech” in 2013.

Sensitivity right to the fingertips for enhanced safety while driving

The new touch screen offers a unique form of interaction. When touched, the display responds with haptic elements as well as visual and acoustic signals. Drivers can feel the keys on the touch screen without looking thanks to variances in the surface structures – and without immediately triggering an action. Rough, smooth, or even patterned surfaces stand for different buttons and functions. The virtual button is not activated until the operator presses it more firmly. Users have the feeling that they are pressing a normal, mechanical button. In appearance, however, the touch screen with haptic elements does not differ from a conventional display.

The touch screen also recognizes the amount of pressure applied by the fingers and activates different functions accordingly. Light pressure, for example, initiates the Help function; by applying varying pressure, users can control how fast or slowly they scroll through a list. Since drivers can feel the keys, looking at the keyboard while pressing a button to change a radio station (for example) is often unnecessary – eyes stay on the road more frequently. The touch screen is equipped with two sensors: a conventional touch sensor and a second sensor that measures the amount of pressure from the fingers. Special software and suspension mechanics are employed to create the various surface structures.