Engineers at the University of New Hampshire have designed a unique living laboratory on a heavily traveled iconic bridge which could change the way infrastructure is viewed. The Memorial Bridge, which links Portsmouth, New Hampshire to Kittery, Maine, has been outfitted with data sensors that have transformed it into a self-diagnosing, self-reporting “smart” bridge that captures a range of information from the health of the span to the environment around it. 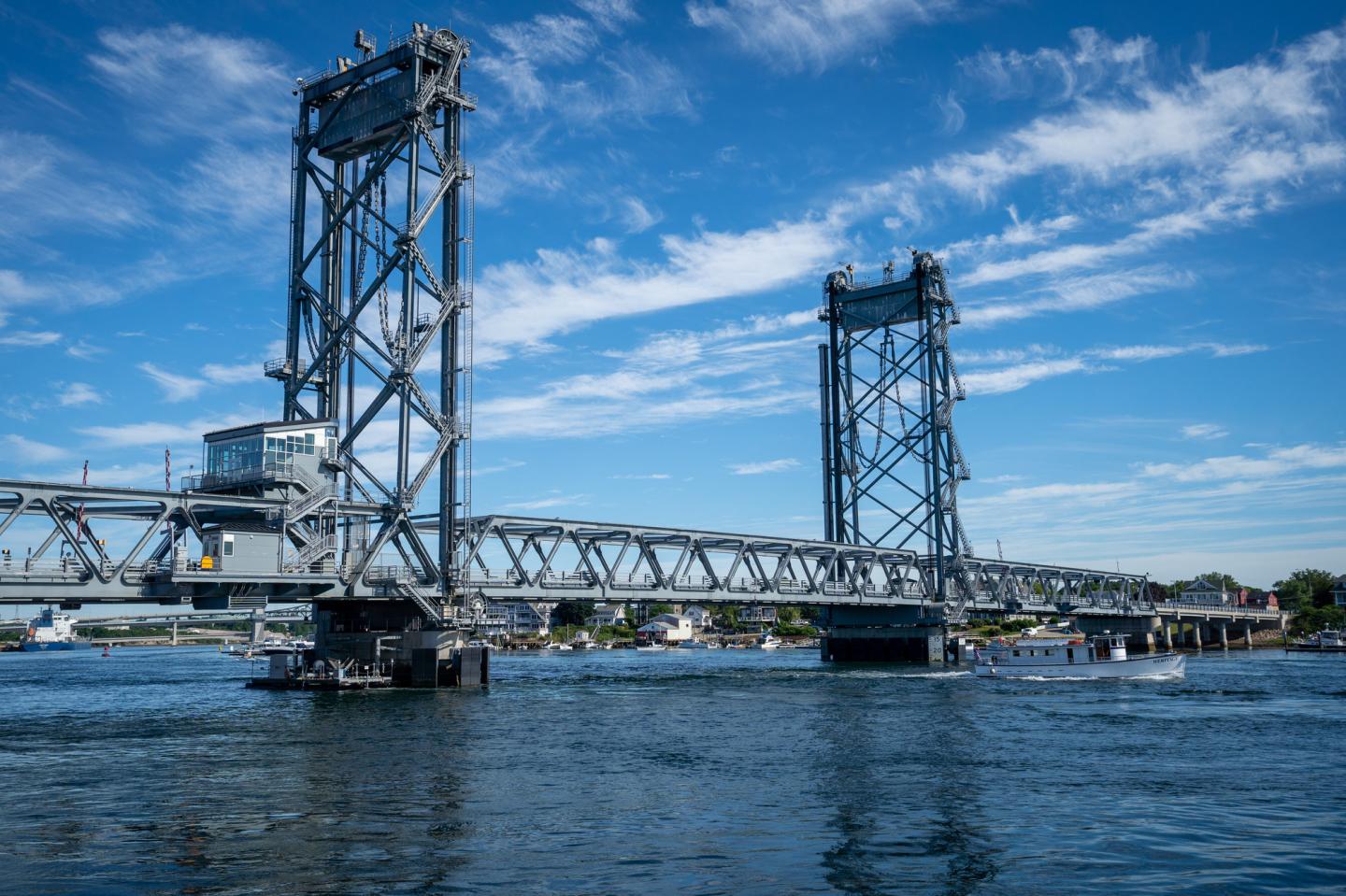 The University of New Hampshire has outfitted the iconic Memorial Bridge, which links Portsmouth, New Hampshire to Kittery, Maine, with data sensors that have transformed it into a self-diagnosing, self-reporting “smart” bridge that captures a range of information from the health of the span to the environment around it. Credit: Scott Ripley/ UNH

“We call it a ‘living’ bridge because it can talk to us and provide valuable information about its health–the stress it deals with, the ease at which it moves, what’s happening around it and even under it in the Piscataqua River,” said Erin Bell, associate professor of civil engineering and principal investigator of the Living Bridge Project. “This bridge is not just for getting us across the water, it can teach us so much more about the world around us.”

Bridges are essential for everyday life, so the researchers overseeing the multi-faceted project saw this as a unique opportunity to expand the structure’s reach.

“Building a new bridge can cost communities millions of dollars, so there is interest in exploring ways to get bridges to do more than just transport people and goods,” said Bell.

In this case, the landmark vertical lift bridge was fitted with 40 self-diagnosing sensors that provide researchers, engineers and the general public with information about structural performance, like weight on the bridge, the behavior of the towers during a bridge lift, strain and acceleration, as well as traffic patterns, weather conditions, sea level and tidal information. It will also provide bridge design engineers unique and innovative information to help create the next generation of bridges with maximum safety, reliability and efficiency.

Taking advantage of the location, the team expanded the project below the bridge and built a floating platform that is secured to the pier underneath the bridge. It is designed to rise and fall with the changing tide and is equipped with its own weather station and sensors. Because the river is considered a harsh marine environment, the platform can be instrumental in collecting data like ebb flow, flood flow, and weather conditions.

A tidal turbine installed on the platform is serving as a teaching tool to test the viability of a renewable energy source different from the more traditional solar panels. Designed and implemented by engineers and graduate students, researchers believe it is the first of its kind to be located under a bridge. Because the Piscataqua River is one of the fastest navigable waterways on the Eastern seaboard, it made sense to try and explore the use of the river’s tidal waters.

“What is exciting about this is that tidal energy can be very predictable,” said Martin Wosnik, associate professor of mechanical engineering. “Unlike solar panels, which can be unreliable due to cloudy days or bad weather, tidal energy is more stable because we can predict the tides well into the future.”

The data that is collected from the turbine and the sensors can be shared across UNH, with other colleagues and researchers and even within the community. While the bridge sensors will help engineers and bridge designers test structural response for future bridges, other information available on the project’s website is already being used as teaching tools for K-12 educators to engage students in citizen science projects to better understand the role of watersheds. There is also a phone app in development that will not only let users learn about the bridge but about the surrounding neighborhoods as well.

“This has been an amazing opportunity to shine a light on the larger role of infrastructure and how it can engage the community,” said Bell. “Our goal was to think about how all of these things come together to ensure that we are learning from the bridge, educating the public and inspiring students, not just for the next bridge build but for the next generation.”

The project is a collaborative effort led by UNH with the New Hampshire Department of Transportation, the National Science Foundation, and the U.S. Department of Energy.

The University of New Hampshire inspires innovation and transforms lives in our state, nation and world. More than 16,000 students from all 50 states and 71 countries engage with an award-winning faculty in top-ranked programs in business, engineering, law, health and human services, liberal arts and the sciences across more than 200 programs of study. As one of the nation’s highest-performing research universities, UNH partners with NASA, NOAA, NSF and NIH, and receives more than $110 million in competitive external funding every year to further explore and define the frontiers of land, sea and space.