In a new study, researchers from Texas A&M University and industry have designed a smart technology that can help utility companies better serve communities affected by blackouts. The researchers said their single device works by improving energy delivery between home solar-power systems and the electrical grid.

“Our innovation lets solar energy consumers be less dependent on the external power grid. The same technology also allows the utility company to control energy distribution, which is particularly useful during power outages caused by storms and other natural disasters,” said Dr. Le Xie, professor in the Department of Electrical and Computer Engineering. “So, It’s a win-win scenario for both the consumer and the utility company.” 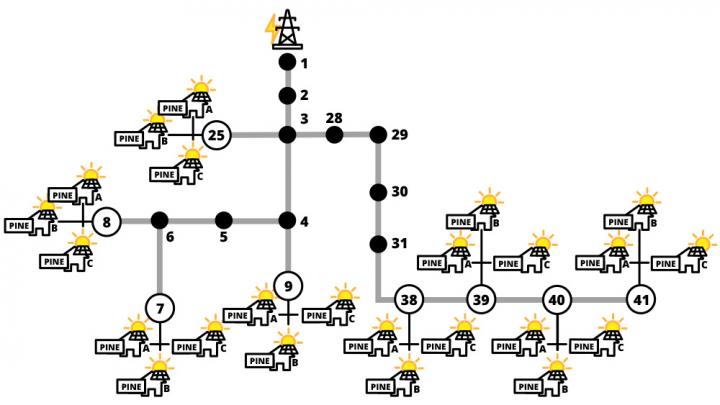 Mixed neighborhood used in the researchers’ computer simulation. Open circles denote nodes where homes have PINE systems and dark, filled circles are nodes where homes do not have PINE. All homes receive energy from the grid.
CREDIT
Texas A&M University College of Engineering

The study was published online in the Institute of Electrical and Electronics Engineers’ Journal of Emerging and Selected Topics in Power Electronics in April.

Over the last decade, a sharp drop in the cost of solar panels has encouraged more households to adopt solar power systems. In these homes, the current generated by rooftop solar panels is fed into an inverter before the electricity is ready for residential use and charging solar backup batteries. Another set of power electronics connects the solar panels and the batteries back to the grid.

These connections ensure that homes are always connected to the grid as long as the grid is functional. During the day, homes consume more solar energy, and any excess energy is supplied to the grid. At night, homes draw electricity from the grid.

The researchers noted that these conventional systems have many disadvantages. Any voltage fluctuations in the grid, due to damage to the power lines or overloading, affects connected devices in homes. Also, they said the current injected into the grid from solar-powered homes can have certain irregularities, known as harmonics, affecting the quality of the power within the grid.

The researchers said another pertinent problem is there is little that a utility company can do to limit the amount of grid electricity consumed by solar-powered homes. This drawback is particularly harmful during natural disasters where other communities or essential services, like hospitals, need energy support.

“Currently, there’s no system in place to regulate or limit energy consumption,” said Dr. Prasad Enjeti, TI Professor III in Analog Engineering in the Department of Electrical and Computer Engineering. “End users with solar-powered systems continue drawing electricity from the grid because utility companies have no way of controlling it.”

Unlike the conventional solar-powered systems that involve many electronics to connect back and forth from the grid, the researchers put together a single device, called the power electronics intelligence at the network edge, or PINE. This device, which is installed outside a home, has three main connections: one going to the home, one to the utility grid and another to the solar panels and batteries. PINE can control the flow of electricity in any one of these directions.

“This device is like an intelligent energy router,” said Enjeti. “It regulates the grid voltage, integrates solar energy, which is locally produced, and intelligently manages and routes the energy in all directions.”

The researchers designed this device to also be programmable, so that an authorized external user, like the utility company, can control the amount of grid electricity reaching solar-powered homes. Enjeti said PINE systems installed at different homes can also be programmed to communicate with each other and with the distribution operator.

To test if the PINE networks will operate as envisioned, the researchers built a hardware prototype and conducted extensive computer simulations of a mixed neighborhood in which some homes had PINE systems and others did not. The hardware performance along with simulations revealed that the homes with the PINE system had a cleaner, more stable voltage. At the grid level, the injected voltage from these homes was also stable because the PINE system was regulating that as well.

“PINE systems can dynamically and in real time inject different voltage support to the utility grid. So, the utility companies need not spend millions in buying capacitor banks to support the voltage across the feeder lines,” said Xie. “During power outages, PINE allows homes to be self-sufficient and use their solar power efficiently. The technology also allows the utility company to wirelessly instruct PINE systems to limit the grid current to solar-powered homes and redirect it to other affected areas.”

PINE technology was co-invented by Enjeti, Xie and Dr. P. R. Kumar, Regents Professor and Distinguished Professor in the electrical and computer engineering department and the College of Engineering Chair in Computer Engineering.

Other contributors to this research include Jorge Ramos-Ruiz in the Department of Computer Science and Engineering; Dr. Bin Wang from the National Renewable Energy Laboratory and Dr. Hung-Ming Chou from Dominion Energy.