Surface rupturing during earthquakes is a significant risk to any structure that is built across a fault zone that may be active, in addition to any risk from ground shaking. Surface rupture can affect large areas of land, and it can damage all structures in the vicinity of the fracture. Although current seismic codes restrict the construction in the vicinity of active tectonic faults, finding the exact location of fault outcrop is often difficult. 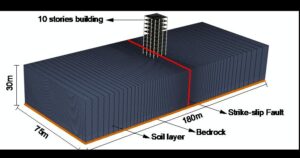 In many regions around the world, engineering structures such as earth dams, buildings, pipelines, landfills, bridges, roads and railroads have been built in areas very close to active fault segments. Strike-slip fault rupture occurs when the rock masses slip past each other parallel to the strike.

A team of researchers led by Associate Professor Behzad Fatahi and supported by PhD candidate Habib Rasouli in the School of Civil and Environmental Engineering at University of Technology Sydney (UTS) has recently found a groundbreaking solution to protect buildings sitting on deep foundations subjected to large ground deformations due to strike-slip fault rupture.

“The strike-slip fault rupture can significantly damage structures such as buildings and infrastructure such as bridges,” Associate Professor Fatahi said. “The unacceptable performance of conventional deep foundations under strike-slip fault rupture is due to a high level of shear forces in the raft and the large deformation and bending moment in the piles supporting the structures.”

“In this novel mitigation technique, the piles are disconnected from the building using an interposed layer of soil which is reinforced using geotextile layers,” Associate Professor Fatahi said. “Geotextiles are polymeric materials made of polypropylene or polyethylene, which are manufactured in large sheets that can be easily transported to construction sites. The geotextiles embedded in the compacted sand and gravel act as isolator and reduce the impact of large ground deformations due to fault rupture.”

Associate Professor Fatahi and his team have developed an advanced three-dimensional computer model to evaluate the performance of commonly used connected piles and the proposed composite foundation as a novel mitigation technique. Their findings, recently published the official Journal of the International Geosynthetics Society, Geotextiles and Geomembranes, have proven that the novel mitigation technique using geotextile layers has a superior performance over the commonly used pile foundation system under strike-slip fault rupture.

“Considering an increasing world population and a need to construct more infrastructure such as bridges and buildings, this novel new foundation system can significantly improve the safety of infrastructure and substantially decrease fatality and damage due to large ground deformations,” Associate Professor Fatahi said.

The team now is looking at extending the solution for protection of structures affected by ground subsidence due to mining and tunnelling activities.