Imagine being able to build and use a robotic device without the need for expensive, specialist kit or skills. That is the vision that researchers from the University of Bristol have turned into reality, creating a lightweight, affordable and simple solution for everyday users.

While multiple robotic arm devices already exist, most are heavy, expensive and outside the reach of individuals who lack the expertise to use them. 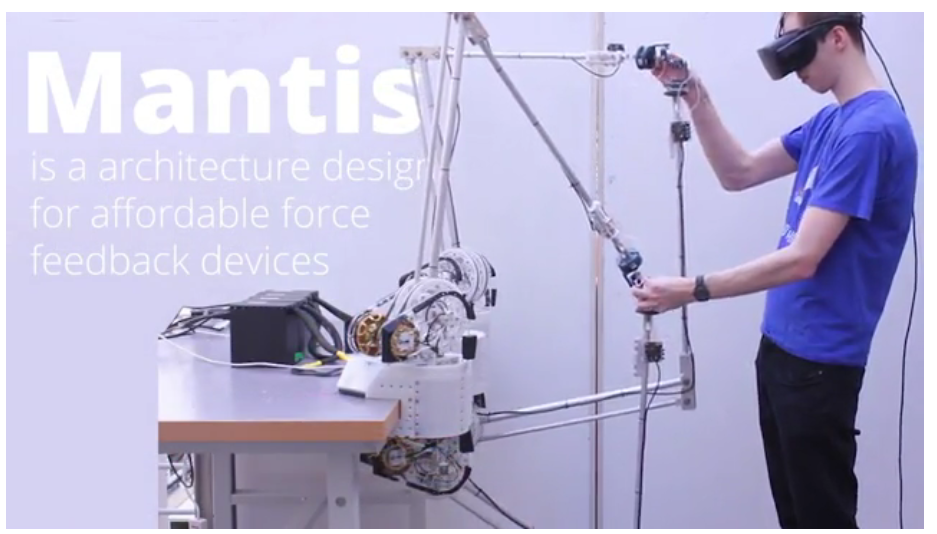 Imagine being able to build and use a robotic device without the need for expensive, specialist kit or skills. That is the vision that researchers from the University of Bristol have turned into reality, creating a lightweight, affordable and simple solution for everyday users.
CREDIT
University of Bristol

Mantis, designed by experts in human-computer interaction from Bristol’s world-renowned team of engineers, is the first system of its kind that enables light, affordable and accessible haptic force feedback.

Human beings have five senses, but electronic devices communicate with us using predominantly just two: sight and hearing. Haptic feedback (often shortened to just haptics) changes this by simulating the sense of touch. Not only can you touch a computer or other device, but the computer can touch you back. A force feedback is a particular kind that can provide force.

Theoretically, the Mantis could be built and used by anyone upwards from a secondary school student. Not only that, researcher say the Mantis can be built for 20 times less the expense of the market equivalent because it uses components, including brushless motors, that cost significantly less than high-fidelity equivalents that are often confined to research labs.

“Imagine a user playing a game in Virtual Reality with Mantis attached to their fingers. They could then touch and feel virtual objects, thus immersing themselves both visually and physically in an alternative dimension.”

Dr Roudaut and her PhD student Gareth Barnaby, are in New Orleans (19-23 October) presenting the Mantis at the User Interface Software and Technology (UIST) conference, the premier forum for innovations in human-computer interfaces that brings together people from graphical and web user interfaces, tangible and ubiquitous computing, and virtual and augmented reality.

Project Mantis is also supported by a new a spin-out venture, Senmag Robotics, which researchers hope will enable them to progress their design to market, starting with the production and testing of the first kits ready for release by the end of the year.

“We will be giving out the plans to allow anyone to build a Mantis,” adds Gareth Barnaby. “Because we are keen to make force feedback devices more widespread and not confined to research labs, we are also looking to produce some easy to build kits as well as pre-built versions that we will make available on the website.”

This work was supported by the Engineering and Physical Sciences Research Council (EPSRC) and the Leverhulme Trust.