The features of 3D printing are significant for the movie industry. The US animation studio LAIKA, relies on using the cutting edge software and 3D printing hardware to make its films. A new collaboration with Fraunhofer and Stratasys now adds the ability to print thousands of precise colors and subtle gradients in plastic, achieving color accuracy unseen in the past. 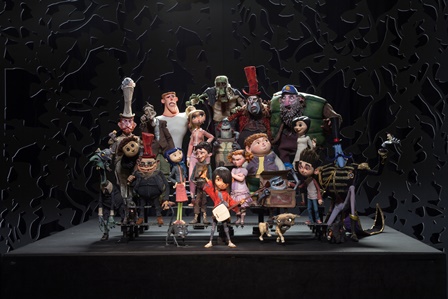 © Photo LAIKA
The characters of LAIKA’s films. On LAIKA’s fifth film they will be utilizing the powerful universal print driver Cuttlefish from Fraunhofer IGD

(Portland/Darmstadt) Stop-motion animation has a unique appeal. When employing the technique, twenty-four frames equal one second of animation. Each frame must be meticulously set up with puppets and props incrementally altered in small movements. An entire movie is compiled from the individual motionless scenes, captured by a digital camera. LAIKA, the US-based animation studio, has produced three Oscar®-nominated animated films: The Boxtrolls (2014), ParaNorman (2012) and Coraline (2009). Their use of 3D printing in animation garnered them a Scientific and Engineering award from the Academy of Motion Picture Arts and Science. The studio’s fourth feature, Kubo and the Two Strings, will open in theaters this year.

In order to produce the puppets facial expressions, LAIKA designs, models, animates and paints the faces in the computer, then uses color 3D printers to produce tens of thousands of slightly different facial expressions. LAIKA pioneered this technique on it’s inaugural film Coraline and has continued to push the limits of 3D Printing technology on each subsequent film. On LAIKA’s fifth film they will be utilizing the most cutting edge color plastic printing hardware from Stratasys combined with the powerful universal print driver Cuttlefish from Fraunhofer IGD to help achieve accurate and repeatable color from face to face.

Cuttlefish makes it possible to work with many printing materials at the same time, to accurately replicate the geometry, colors and smooth color transitions of the original, and to simulate the printout on screen in advance. “Our first tests were fantastic”, says Academy Award winner and director of LAIKA’s rapid prototyping department, Brian McLean. “We have never seen such accurate and detailed color before in a plastic 3D print.”