Follow the unbreakable bouncing phone! A Polytechnique Montréal team recently demonstrated that a fabric designed using additive manufacturing absorbs up to 96% of impact energy – all without breaking. Cell Reports Physical Science journal recently published an article with details about this innovation, which paves the way for the creation of unbreakable plastic coverings. 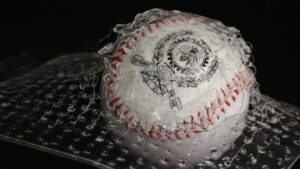 The concept and accompanying research revealed in the article is relatively simple. Professors Frédérick Gosselin and Daniel Therriault from Polytechnique Montréal’s Department of Mechanical Engineering, along with doctoral student Shibo Zou, wanted to demonstrate how plastic webbing could be incorporated into a glass panel to prevent it from shattering on impact.

It seems a simple enough concept, but further reflection reveals that there’s nothing simple about this plastic web.

The researchers’ design was inspired by spider webs and their amazing properties. “A spider web can resist the impact of an insect colliding with it, due to its capacity to deform via sacrificial links at the molecular level, within silk proteins themselves,” Professor Gosselin explains. “We were inspired by this property in our approach.”

Researchers used polycarbonate to achieve their results; when heated, polycarbonate becomes viscous like honey. Using a 3D printer, Professor Gosselin’s team harnessed this property to “weave” a series of fibres less than 2 mm thick, then repeated the process by printing a new series of fibres perpendicularly, moving fast, before the entire web solidified.

It turns out that the magic is in the process itself – that’s where the final product acquires its key properties.

As it’s slowly extruded by the 3D printer to form a fibre, the molten plastic creates circles that ultimately form a series of loops. “Once hardened, these loops turn into sacrificial links that give the fibre additional strength. When impact occurs, those sacrificial links absorb energy and break to maintain the fibre’s overall integrity – similar to silk proteins,” researcher Gosselin explains.

In an article published in 2015, Professor Gosselin’s team demonstrated the principles behind the manufacturing of these fibres. The latest Cell Reports Physical Science article reveals how these fibres behave when intertwined to take the shape a of web.

Study lead author Shibo Zou, used the opportunity to illustrate how such a web could behave when located inside a protective screen. After embedding a series of webs in transparent resin plates, he conducted impact tests. The result? Plastic wafers dispersed up to 96% of impact energy without breaking. Instead of cracking, they deform in certain places, preserving the wafers’ overall integrity.

According to Professor Gosselin, this nature-inspired innovation could lead to the manufacture of a new type of bullet-proof glass, or lead to the production of more durable plastic protective smartphones screens. “It could also be used in aeronautics as a protective coating for aircraft engines,” the Professor Gosselin notes. In the meantime, he certainly intends to explore the possibilities that this approach may open for him.

Established in 1873, Polytechnique Montréal is one of Canada’s largest engineering education and research universities. It ranks first in Quebec in terms of the scope of its engineering research activities, and is located on the Université de Montréal campus – North America’s largest Francophone university campus. With over 52,500 graduates and over 120 academic programs, Polytechnique has trained 22% of the Ordre des ingénieurs du Québec (OIQ)’s current membership. Polytechnique Montréal is also distinguished by its 285 talented professors, more than 9,000 students, and overall annual budget of $255 million, nearly $100 million of which is reserved exclusively for research activities.