In the past decade, engineers at the University of California San Diego have 3D printed a variety of devices ranging from rocket engines, to robots, to structures inspired by the seahorse’s tail. Now, nanoengineers have added a new item to that list: a 3D printed biomimetic blood vessel network.

The new research, led by nanoengineering professor Shaochen Chen, addresses one of the biggest challenges in tissue engineering: creating lifelike tissues and organs with functioning vasculature — networks of blood vessels that can transport blood, nutrients, waste and other biological materials — and do so safely when implanted inside the body. 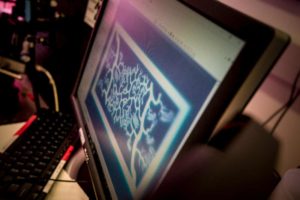 “Almost all tissues and organs need blood vessels to survive and work properly. This is a big bottleneck in making organ transplants, which are in high demand but in short supply,” said Chen, who leads the Nanobiomaterials, Bioprinting, and Tissue Engineering Lab at UC San Diego. “3D bioprinting organs can help bridge this gap, and our lab has taken a big step toward that goal.”

Chen’s lab has 3D printed a vasculature network that can safely integrate with the body’s own network to circulate blood. These blood vessels branch out into many series of smaller vessels, similar to the blood vessel structures found in the body.

Chen’s team developed an innovative bioprinting technology, using their own homemade 3D printers, to rapidly produce intricate 3D microstructures that mimic the sophisticated designs and functions of biological tissues. Chen’s lab has used this technology in the past to create liver tissue and microscopic fish that can swim in the body to detect and remove toxins.

Researchers first create a 3D model of the biological structure on a computer. The computer then transfers 2D snapshots of the model to millions of microscopic-sized mirrors, which are each digitally controlled to project patterns of UV light in the form of these snapshots. The UV patterns are shined onto a solution containing live cells and light-sensitive polymers that solidify upon exposure to UV light. The structure is rapidly printed one layer at a time, in a continuous fashion, creating a 3D solid polymer scaffold encapsulating live cells that will grow and become biological tissue.

“We can directly print detailed microvasculature structures in extremely high resolution. Other 3D printing technologies produce the equivalent of ‘pixelated’ structures in comparison and usually require sacrificial materials and additional steps to create the vessels,” said Wei Zhu, a postdoctoral scholar in Chen’s lab and a lead researcher on the project.

And this entire process takes just a few seconds — a vast improvement over competing bioprinting methods, which normally take hours just to print simple structures. The process also uses materials that are inexpensive and biocompatible.

Chen’s team used medical imaging to create a digital pattern of a blood vessel network found in the body. Using their technology, they printed a structure containing endothelial cells, which are cells that form the inner lining of blood vessels.

The entire structure fits onto a small area measuring 4 millimeters × 5 millimeters, 600 micrometers thick (as thick as a stack containing 12 strands of human hair).

Reearchers cultured several structures in vitro for one day, then grafted the resulting tissues into skin wounds of mice. After two weeks, the researchers examined the implants and found that they had successfully grown into and merged with the host blood vessel network, allowing blood to circulate normally.

Chen noted that the implanted blood vessels are not yet capable of other functions, such as transporting nutrients and waste. “We still have a lot of work to do to improve these materials. This is a promising step toward the future of tissue regeneration and repair,” he said.

Moving forward, Chen and his team are working on building patient-specific tissues using human induced pluripotent stem cells, which would prevent transplants from being attacked by a patient’s immune system. And since these cells are derived from a patient’s skin cells, researchers won’t need to extract any cells from inside the body to build new tissue. The team’s ultimate goal is to move their work to clinical trials. “It will take at least several years before we reach that goal,” Chen said.

*These authors contributed equally to this work.

This work was supported in part by grants from the California Institute for Regenerative Medicine (RT3-07899), the National Institutes of Health (R01EB021857) and the National Science Foundation (CMMI-1332681 and CMMI-1644967).